Leader of the Red Lion Knights

The many medals he's received from the King

Red Lion Style Mercenary Arts (紅獅子流傭兵術, Benijishi-ryū Yōhei-jutsu)
Neinhalt Sieger (ナインハルト・ズィーガー, Nainharuto Zīgā) is a character of the Samurai Shodown series who was introduced in Samurai Shodown II. Like Nicotine, he was dropped after his introduction and is limited to cameo appearances throughout the series. Sieger was made to be the powerful overseas character for new fans. He was given "macho" traits to appeal to female players. Hiroaki, one of SNK's illustrators, stated that Sieger is his favorite character from the series.

In German, a very literal translation of his name means "No Stop Winner".

He is a Prussian warrior and the leader of the Red Lion Knights. He went to Japan to deal with the threat of Mizuki Rashojin. In his ending, he saves his country from demons and is married to Elizabeth, the daughter of the Prussian King.

In the spin-off, Samurai Spirits RPG, he married Queen Victoria and is protecting France against any demon attacks. He assists the party battling Mizuki whilst they are in Paris and Green Hell. However, Mizuki traps him within one of the Dark Bells, a medium which increases Ambrosia's powers and siphons evil spirits. Knowing the dangers of the bell, he allows the party to destroy it, killing himself in the process.

Sieger is a proud knight, loyal to the King and country. He is a fair warrior who respects his opponents' abilities, though he hates to lose face in front of his men and liege.

His fighting style consists of unique grappling and punching techniques, better amplified by the power of his weapon. His gauntlet, which is easily capable of shielding his entire body, also possesses the ability to shoot ammunition when he expands his fist. For some time, he was one of the few characters in the series who is capable of chaining different special commands together to create a specific combo.

His moves are written in German and transcribed in hiragana. The name of his newest super is Dragoon Faust (ドラグーン・ファウスト, Doraguun Fausto). It refers to Dora Gun, world's largest railway gun built by Hitler. Curiously, Sieger won't use his built-in cannon during this move. 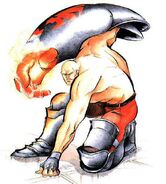 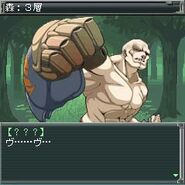