Nakeru (written as 「N・A・K・E・R・U」) is a visual novel series produced by SNK Playmore for the Japanese imode and Yahoo cellphone networks. The series takes its namesake from the word "cry" (泣き, naki), suggesting that the stories will emotionally move the player. The genre for the titles vary with each entry. No localization efforts have been made so far.

This game is a dating simulation. The protagonist is attending a conservative private school where people only meet one another through a complex mailing system. He is hoping to find the elusive girl who gave him his first kiss before he graduates from high school.

The character designs and main visuals for this game were created by Kamiya Maneki.

This game is a murder-mystery series. It's also the longest on-going entry available as the story is released in an episode format; episode four is the most current chapter. The protagonist is attending an all girls school, and she is very protective of the people she loves. She is trying to find the truth behind the school's "Elimination Curriculum" (the namesake of the game), which is a program that forces people to kill each other.

The character designs for this game were created by Itsukawa Kizuku. Most of the girls have the kanji "moon" (月, tsuki) in their names.

Mafuyu Kagari - protagonist who is following her mother's footsteps to become a great teacher.
Hisaka Uzuki - Mafuyu's friend who will gladly risk her life for friendship. Acts as Mafuyu's double.
Setsuka Uzuki - Mafuyu's younger adopted sister; doesn't like to leave the house much.
Satoi Minatsuki - Setsuka's housemaid. Maternal lady who will help out Mafuyu's investigations to the fullest extent of her abilities.
Rin Kisaragi - Mafuyu's teacher who acts as the voice of reason in most situations. Has a fashion style that's different from Japan.
Sayu Fumitsuki - Mafuyu's classmate who is always energetic; is a good mood setter to otherwise tense situations.
Saya Fumitsuki - Sayu's older twin sister. She is more introverted than Sayu, as well as an expert in archery.
Yuzuru Hazuki - Sayu's best friend who does everything with her friend. Doesn't know what to do when she's left alone.
Yuzu Sato - deranged looking girl with her hair always covering her face; has a wicked smile and a liking for weapons.
Shie Nagatsuki - a student who reportedly died in a car crash that's believed to be tied to the "Elimination Curriculum", her "spirit" still haunts the school.
Kanna Ikoma - A teacher at the school. He is a womanizer who pursues his hobby during his spare time. Seems to have another side of himself that he doesn't show.

An Asian fantasy game, believed to take place in Korea with a distinct Chinese influence. Unlike other titles, this game is targeted towards a female audience.

The story's premise involves a legend of two treasures, said to grant powers beyond imagination to its wielder. The treasures are not identified in historical records; the only clue of their form is through a riddle, "The White Flower, Moon Dances" (the game's namesake). One day, a strong power stole the "Shinoishi" (roughly translated as the "True King's Stone"), one of the two treasures in the riddle. The protagonist sets out alone to find the missing piece, "The White Flower".

The character designs and main visuals for this game were created by You Satsuki.

Shouran (咲蘭) - the protagonist who came from afar to search for the "Seikouken", a celebrated sword for her master; is also well versed in swordplay and sensing ki.
Shi Suusei (司崇清) - Shouran's senior who is better than her in both traveling and spell-casting. He's arrogant but very protective of Shouran.
Rakushi (烙仔) - owner to a bar; although he is a part of an unnamed organization, he welcomes all wanderers to his place, not caring for status or gender. Seems to have some business with Shouran.
Youshun (陽俊) - young martial artist who is on the same level as Shouran. Slightly weaker than her in swordplay but wants to help out in whatever way that he can.
Fukkai (仏海) - an elderly swords master who teaches his art to others. Seems to have knowledge of the sword that Shouran is looking for.
Shi Keicho (司景澄) - Suusei's father. Also a sorcerer like his son. Strict and angered by his son's decision to follow Shouran.
Meishun (姪春) - antagonist's daughter who ran away from home to find freedom; meets with Shouran and travels with her.
Ain Sokei (晏宗敬) - Fukkai's son who died sometime in his twenties. Used the same techniques as Shouran.

A four part adventure novel game that follows the protagonist and her encounters with seven transfer students.

Nanami Ichinose - protagonist who has a mysterious past and hidden supernatural powers; is 18 years old.

The series have been well received in Japan though it has yet to gain mass popularity. Most complaints seem to stem from the availability of the games, as one network will not update as quickly as the other. The series longest on-going title, Erikari, is often criticized for being a little too similar to another popular title of the genre, Higurashi no Naku Koro ni. 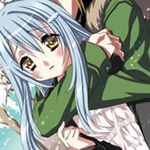 Satori being hugged by the protagonist. 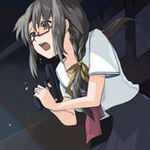 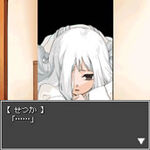 Setsuka behind the door the protagonist opens. 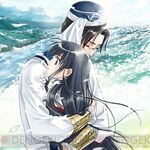