watch 04:21
Wiki Targeted (Games)
Do you like this video?
Play Sound

Arcade, TI-99/4A
Munch Mobile, known in Japan as Joyful Road, is a top-down driving game released by SNK in 1983 for arcades, and later ported by Texas Intruments to the TI-99/4A personal computer. It was included as a free DLC in the SNK 40th Anniversary Collection.

The player controls a comic, sentient car, and must use it's giant arms to grab items on the side of the road all while maneuvering the car and dodging obstacles. The game uses two control sticks, one for steering and the other to stretch the arms. 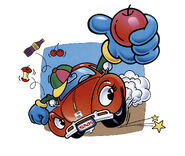 Key art
Add a photo to this gallery
Retrieved from "https://snk.fandom.com/wiki/Munch_Mobile?oldid=140586"
Community content is available under CC-BY-SA unless otherwise noted.