Priestess of the Three Blades of Dominion

Bathing in the moonlight

Mikoto (命, Mikoto) is a character who is introduced in Samurai Shodown: Warriors Rage. She is voiced by Yumi Kakazu.

She is Shiki and Shadow Asura's child, born at the end of Samurai Shodown 64: Warriors Rage. Before she died, Shiki left her child with Nicotine Caffeine and his student, Haohmaru. As she grew over the years, Mikoto demonstrated inhuman abilities and skills. She adapts these powers into a powerful fighting style that corresponds with her dual personas, commonly dubbed as "Angel" and "Devil" respectively. This inner conflict occasionally materialized in the form of one white and black wing for each half. She uses her heavenly powers to conduct religious services and rituals in which she was revered as a religious symbol (shrine maiden).

Mikoto, ashamed of her red eyes, flees from her home, Kokain Shrine. She subsequently arrives in Ritenkyo and, through Oboro's enticements and her infatuation with Tohma Kuki, joins as a member of the "Three Blades of Domination". Eventually, Haohmaru sets out on a quest to find her. When he reaches Ritenkyo, he kills Oboro and tells Mikoto of her heritage. Though she is thankful, she decides to wait for Tohma's return at Ritenkyo.

In her ending, the "Devil" dominates her "Angel" side and defeats Yuda. However, both Asuras instinctively awaken and slay her "Devil" side, revealing the darkness to be her parents' tormentor, Yuga. The freed Mikoto (or "Angel" Mikoto) is encouraged by her parents' spirits to continue living, for their sake and hers.

Mikoto is a kind and caring woman, fearful of her "Devil" side's blood lust and control over her. She wants to live a normal life away from blood shed and torment.

Mikoto excels at both long range and close combat. Her long range attacks are able to reach across the whole screen. At close range, she can easily string together a combo of all her moves. Including the ability to drain her opponent's life, she can also temporarily stun them. This gives her time to execute or even lengthen a combo. Her weakness lies in her long range boomerang attacks as they leave her open. If her opponent anticipates the angle of the attack, she is an easy target.

Her weapon was previously sealed away as it utilizes the user's dark energy. When Mikoto joined the Razor Trio, Oboro gave it to her. 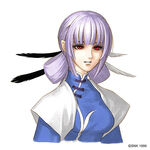 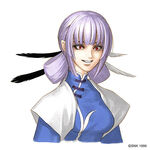 Ink painting
Add a photo to this gallery
Retrieved from "https://snk.fandom.com/wiki/Mikoto?oldid=134534"
Community content is available under CC-BY-SA unless otherwise noted.