SNK Wiki
Register
Don't have an account?
Sign In
Advertisement
in: Characters, King of Fighters Characters, Days of Memories Characters,
and 11 more

White Magic + Chinese Boxing
Mignon Beart (ミニョン・ベアール) is a videogame character from the SNK Playmore's fighting game series KOF: Maximum Impact, part of The King of Fighters series series. She is the older sister to Ninon Beart and the self-proclaimed rival to Athena Asamiya. Mignon also appears in the dating simulation game, Days of Memories~Pure White Angels. Her official nickname is Innocent Witch (なウィッチ in MI, マジカルパワー in MI2)

She is voiced by Miwa Yasuda and Vanessa Bellardini.

Similar to how Lien Neville contrasts Mai Shiranui, Mignon was designed to be the rival to Athena. Keywords to creating her persona were "innocent, defiant, but a little [censored]", which Falcoon admits is best seen through her actions rather than her figure. Her design is based on typically "cute idol" traits, particularly her boots, her manner of referring to herself in third-person, and her alternate catgirl costume. Her magical powers were created to counter Athena's Psycho Powers, which is interpreted by Falcoon to be akin to witchcraft.

She was initially not well received by Ureshino and other veteran staff, deeming her to not entirely fit the mood of the King of Fighters universe, though they lightened their impressions after considering the presence of Psycho Soldier members and other "orthodox" characters. As her character further developed, she became the "stupid but cute" character, Ureshino using the term as a simple means of endearment.

She is an apprentice white magic witch whose grand goal is to bring peace to the world through magic. Whether a fault of her fine breeding or not, Mignon knows little of determining the tenor of circumstances around her but once she has decided on something, she has the strength of will to fulfill her goal. She believes that her grandmother was a genuine witch and that one day she will be able to open the jewel box that she received from her grandmother, thus becoming a real witch.[1][2]

Although she is a young adult, some may say her personality is childish. She refers to herself in third-person and is cheerful around everyone. She declares herself an idol for love and peace though hardly anyone believes her. She has a rivalry with her sister Ninon.

Her fighting style encompasses a unknown form of chinese boxing (Kung Fu), but her focus is using her magic abilities.

One of Mignon's discarded designs.

Mignon asleep with her sister Ninon

Mignon and Ninon by Falcoon 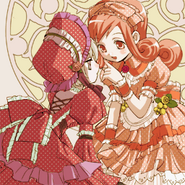 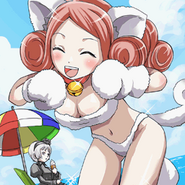