Michael Max (マイケル・マックス Maikeru Makkusu) is a video game character from the Fatal Fury fighting game series. His appearance resembles real-life boxer Mike Tyson. He is still remembered by fans even though he doesn't appear in later games. He is also the friend and student of Axel Hawk.

Michael is a former heavy weight boxer champion. He was unbeatable for the title and was predicted to keep it for many years to come. However, Michael also participated in street fighting and nearly killed a man in one of his matches. Once the sports world caught word of it, he was revoked of his title and kicked out of the boxing circuit. He participates in the King of Fighters tournament for the thrill and to reclaim his lost glory before the world. Sadly, Michael was beaten in the course of the tournament by either Terry Bogard, Andy Bogard or Joe Higashi.

Michael Max's personality is very obscure. Even more than Hwa Jai's. He seems to think high of himself, but he's not a bad person. He also seems to be a devout Catholic, as he makes the Sign of the Cross every time he wins a fight (or rather, a round). 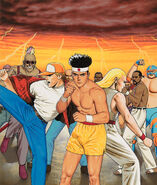