In this Korean name, the family name is Lee.

"May" Lee Jinju (Hangul: 이진주; Hanja: 李珍珠, li Jinju; Japanese: メイ・リー, Mei Rī), usually referred to as just May Lee, is a character who was introduced in The King of Fighters series. May is depicted as a perky teenager who fights for justice using Taekwondo. She is unique within The King of Fighters for her ability to change into a separate Hero Mode, in which she dons large gloves and a red scarf.

May Lee is introduced in The King of Fighters 2001 as one of the many students of Kim Kaphwan, and has idolized him and Jhun Hoon ever since she could remember. One day, while training, she hears word of the King of Fighters tournament. As always, Team Korea (composed of Chang Koehan, Choi Bounge, Jhun Hoon, and team captain Kim Kaphwan) are set to enter.

However, Jhun injures his neck and back in a street accident, and May is required to replace him as a member of Team Korea. Kim suggests that she also keep an eye on her teammates, former criminals Chang Koehan and Choi Bounge. This suits Chang and Choi, as May, unlike Kim, does not feel the need to physically punish them on a regular basis.

Despite her inexperience, May surprises the audience with her unique Taekwondo style in the tournament. Kim and the others are also surprised by her achievements, and she soon gains much praise. After the tournament ends, May returns to South Korea along with her partners, and are celebrated as heroes for ending the menace of the evil NESTS cartel that was at work behind the tournament.

In The King of Fighters 2002, May Lee is cast out from Team Korea as the tournament is a three-member team fight and May therefore finds a space with Mai Shiranui and Yuri Sakazaki.

May Lee is very happy towards good people. She is very joyful, and her personality resembles that of Athena Asamiya. Like Kim, May Lee has a very strong sense of justice, and will punish any evil being she encounters.

May Lee uses Taekwondo as her fighting style. She has another stance called Hero Mode. During her Hero Mode she plays a homage to tokusatsu-type characters, specifically Kamen Rider.

The King of Fighters Neowave artwork. 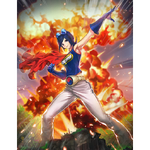 Add a photo to this gallery
Retrieved from "https://snk.fandom.com/wiki/May_Lee_Jinju?oldid=148707"
Community content is available under CC-BY-SA unless otherwise noted.