Invaders (one of them is a waiter)

The personality of these baddies is almost impossible to read since they have a completely different culture than our own. But, what can be determined is that they are quite ruthless. Having said that, they are not stupid, and will ally with humans if they face a threat too great to handle themselves.

Their fighting style is extremely unorthodox since they use their tentacles, laser guns and even call other martians and UFOs. 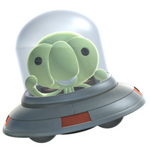