Marky (マーキー) is a character from Fatal Fury. His first appearance was in Garou: Mark of the Wolves. He is voiced by Junko Takeuchi.

Marky was the son of Kevin Rian's partner who got killed by Freeman. Kevin took Marky under his wing and started to take care of him like a son. Kevin thought Terry Bogard was the one who killed Marky's father, but he was mistaken. During the Maximum Mayhem tournament, Marky goes missing, but Kevin, with the help of Terry, finds him sleeping peacefully on a tree.

Marky is a carefree, outgoing child who really likes Kevin. Deep down, he feels that maybe Kevin can make up for his loss. He loves eating Kevin's freshly cooked french toast. 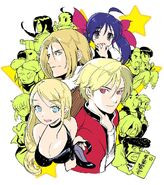 Kevin and Marky by Falcoon
Add a photo to this gallery

Retrieved from "https://snk.fandom.com/wiki/Marky?oldid=109813"
Community content is available under CC-BY-SA unless otherwise noted.