SNK Wiki
Register
Don't have an account?
Sign In
Advertisement
in: Characters, King of Fighters Characters, Days of Memories Characters,
and 11 more
English

A style that utilizes various legal and illegal weapons
Malin (まりん) is a character from The King of Fighters series. She debut in The King of Fighters 2003 as a member of the High School Girls Team, alongside the J-idol Athena Asamiya and the sumo student Hinako Shijou.

She is voiced by Kazuyo Inosako.

After the development team decided that Choi Bounge would not appear in The King of Fighters 2003, the team immediately agreed to make "a cute girl character". Malin's name being spelled as "Malin" and not "Marin" was something the supervising designer insisted, and remains as a mystery as to why.[1]

Malin is a spoiled girl always trying to get what she wants. Aside from the assumption that she is usually on some sort of mission, her real motives for being in the tournament remain unclear. She is prideful of her abilities and easily upset when she's underestimated.

She also seems to enjoy being sneaky and mischievous and easily offended by petty comments, such as how she easily and for long developed a grudge against Yuri Sakazaki for calling her fighting style "cowardly".

Her fighting style utilizes use of various weapons and her excellent agility; she even somewhat resembles a ninja. Also, honor does not seem to matter to her during fights.

The majority of her weapons are knives and blades, though she also uses electric batons, yo-yo's (though they are also fitted with blades which may or may not be used) and a giant hammer. Her moves may also seem childish or teasing, particularly her use of yo-yo's and way of attacking, fitting in well with her identification of a high school girl. 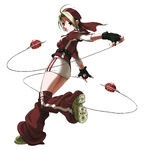