Shiranui-ryuu Ninjutsu
Mai Shiranui (不知火 舞, Shiranui Mai) is a character from both the Fatal Fury and The King of Fighters series. Her official nickname is The Alluring Ninja Girl (魅惑 の 女忍者, Miwaku no Kunoichi).[5][6]

Due to Mai's vast popularity among fans around the world, she has been in most promotional art, game arts, themes, and merchandise out of any character, making her the female mascot and sex symbol of SNK. Mai was rated #4 in GameSpy.com's "Top Ten Babes in Games" feature [7] and #5 in Game Informer's "Top Ten Hottest Girls of the 16-Bit era." Along with the many figures and merchandise that have been made in her image, she has made an outside game appearance in the spin-off series Queens Gate. Her great reputation has also influenced other female fighters in other fighting games, mainly Dead or Alive in which Mai herself makes two DLC appearances (in the fifth and sixth installments).

She was originally not planned to be included in Fatal Fury at all, as her fighting style was created for a different male ninja. When developers shifted their focus to include an idol character in the series, they decided to scrap the Shiranui man for Mai. Her characteristic "bounce" was loosely modified from a kunoichi (female ninja) method of assassination: to be sensual to their unassuming prey before they strike. According to an issue of Neo Geo Freak, her breasts were modeled after Fumie Hosokawa and her bottom is modeled after the late-Ai Iijima; both women were famous idols at the time.

During the development of The King of Fighters '94, Mai's designer wanted to add more animation to her neutral pose. When the designer came back with the "swaying bosom", the developers were awestruck.[8][9] Due to this pose's potency, however, Mai's eye-popping motions were stilled in the KOF '94 international home version.[10][9]

In an interview with one of the series designers, Shinkiro, he replies that Mai was the most difficult character to illustrate. He comments "I thought she was going to burst out of her costume..." [11] In the Neo Geo Freak's 1997 Volume 8 character poll, she was voted as the third favorite character with a total of 1,604 votes.[12] 199 votes from the male fans and 1,405 votes from the female fans.[13] And in Neo Geo Freak's August 1998 issue, she was ranked as the 7th best character.[14] In the character popularity poll on Neo Geo Freak's website, she was voted as the fifth favorite character with a total of 2,380 votes. On Falcoon's SNK 40th anniversary page he states that both Mai and Terry are his favorite SNK characters.[15]

Mai Shiranui is the granddaughter of Hanzo Shiranui, master of ninjitsu and Koppo-ken. Mai learned from her father the secrets of Ninjitsu. She had met Andy Bogard, during this time, who had come to train under her grandfather. Mai then had to take alternate courses from her grandfather's friend, Jubei Yamada in ninjitsu. At first, Mai was uninterested in Andy and only thought of him as another callous man only interested in his training. It wasn't until he gave her a present on her birthday that she saw him in another light and eventually fell in love with him.

She spends much of the series endlessly pursuing Andy and fantasizing about various daydreams about their wedding. When developers were asked about her whereabouts during Mark of the Wolves, they chose not to answer the question directly. However, they did divulge that she still loves Andy — as she always has — ten years later.

The King of Fighters

During nearly every King of Fighters tournament, Mai pesters Andy to enter and form a team with her. Upset at his refusals and choice to join a separate team, she forms an all-women team with the help of Yuri and King. In the following years, her teammates change, but she remains firm to enter the tournament to help encourage King and her fellow team members and to prove to Andy the error of his ways. In King of Fighters 99, she is finally able to join the tournament in the same team as Andy. However, the following tournament was asked to step out to allow Blue Mary to investigate a case. Denied again, she is angered by the request and joins the Women's team again and has remained a reoccurring member ever since. In the various team endings, she is often celebrating the team's victory at King's bar or fantasizing about Andy.

Mai did not participate in the KOF XI to search for Andy, who was busy at training his disciple, Hokutomaru. Later, Mai decides to enter the KOF XIII with her first KOF teammates, King and Yuri, as she felt that the KOF tournament isn't complete without her. She isn't upset at Andy while making her choice, content to enter a tournament with both her and him in it once more.

Mai is a very cheerful and temperamental girl. She tends to also be somewhat of an airhead and admires any kind of beauty or attractiveness, which sometimes comes across as being vain. She also at times compares attractive boys who flirt with her or acknowledge her beauty to Andy, acknowledging their attractiveness but ending with a comment saying they're 'not as cute as Andy'.

Like many girls, she has dreams of getting married to her Prince Charming. She found that same Prince Charming in Andy and self-proclaimed herself his fiancé, which at times, has creeped out Andy himself. A notable example of this is her intro with Andy in KOF97, proposing to Andy outright in a wedding dress, or scaring Andy with a mock child doll in KOF '99 and 2001. Despite this, Andy mutually acknowledges her love but prefers to keep quiet about it.

Although her peppy fighting persona suggests otherwise, Mai is actually a traditional and ideal Japanese beauty. However, her pride as a Shiranui ninja and infatuation with Andy usually keeps her from fitting the mold 100% of the time.

Despite her complex relationship, Mai has shown her support for the women's team and their notorious reputation for years and enjoys working with her teammates. As for Andy's brother Terry, Mai admires him, although she gets skeptical when she feels he's hiding something about Andy. Mai shows deference towards Joe but she feels his silly habits are a little annoying.

Mai uses the Shiranui-ryuu form of ninjutsu combined with her fire powers to fight.

Her style resembles normal ninjutsu with more graceful and majestic moves, somewhat in reference to traditional Japanese dance. She also uses paper fans as weapons, integrating them into her combat technique and using them to perform several combinations and moves. Her clothing, specifically, the tassel on her ninja garb, is also used to attack the opponent. She's also exceptional in hand to hand combat using different throws and techniques to gain the upper hand. Mai has shown great Strength as well as being strong enough to throw enemies heavier than her and using her strong elbow strike capable of breaking through her enemy's defense's incapacitating them. 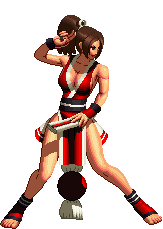 Another outfit designs from the KOF: Maximum Impact series

Retrieved from "https://snk.fandom.com/wiki/Mai_Shiranui?oldid=150747"
Community content is available under CC-BY-SA unless otherwise noted.