SNK Wiki
Register
Don't have an account?
Sign In
Advertisement
in: Characters, King of Fighters Characters, Those from the Past,
and 16 more
English

"One from the past"

Space manipulation
Magaki ( Magaki, lit. meaning "Apocalypse") is a character in The King of Fighters series. He's the boss of KOF XI. Like the enigmatic Mukai, nothing is known about him, save for the fact that he hosts The King of Fighters tournament, and knows Mukai.

He is voiced by Koji 'Spicy' Yagi.

He was designed as a character to "disgust and disturb fans with his movements", giving more character to the group Those from the Past. He is meant to be an irredeemable and hated character.

A member of Those From the Past, Magaki, alongside Shion, hosts the KOF tournament in hopes of reviving Orochi to give its power to his master. Magaki hates Mukai's ideology that humans should be watched carefully and warns Shion to not betray him. When Shion is defeated by Kyo and his team, Magaki traps him in another dimension. Like Mukai before him, after he was defeated he stood up, apparently unscathed, and after commenting that perhaps it was more than spirit that was needed to awaken Orochi, made his exit into another realm.

However, he was less lucky than Mukai; as he finally realised the error in his plan, and what was needed to awaken Orochi, he was killed by Shion's spear, hurled from the dimensional rift Magaki was escaping to. The next day, however, his body disappears. In Team K's ending, Heidern remarks that his team had obtained Magaki's dead body. Then, as shown in the Ikari Team's ending, two members of Those From the Past boarded on Heidern's main ship and took Magaki's dead body away, their farewell gift being an explosion on one of the fleet's vessels.

It is currently unknown if Verse's actions in KOF XIV also resulted in Magaki's revival.

He seems to have little respect for Mukai as he mockingly imitates his pious manner of speech, and seems to look down on his caution toward humans. He shows even less respect for humans in general, believing them to have little-to-no potential and overall weak. He seems to expect all of his whims fulfilled and has little patience for those that don't comply. He respects strength, is a wholehearted advocate of "survival of the fittest", and will only work along with those capable of meeting his standards.

Magaki's fighting style seems to revolve around filling the screen with his energy attacks. He can fill the arena with teleporting energy balls, portals through which he can grab the opponent, or his LDM, which is a massive flow of energy that literally covers the screen. When fighting hand-to-hand, Magaki takes advantage of his long limbs to fool the enemy. All of this renders Magaki a victim of a very severe case of "SNK Boss Syndrome", and is perhaps the cheapest boss in any SNK fighting game. It has been joked that he is a boss who turns a fighting game into a bullet hell game.

Magaki in his human form

Magaki in his awakened form. 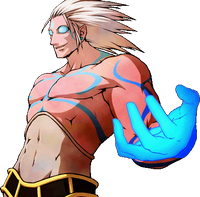 The King of Fighters XI winpose