The basketball he uses during a battle

The noise of scratching glasses

Participating in competitions by postcard

Lucky is a karate champion who is also a former professional basketball player who is asked by his friend, Heavy-D!, to form a team with him in the King of Fighters tournament. Aside from his desire to help bolster his friend's confidence, Lucky joins the tournament to test his fighting ability. In their ending, he says he'll continue street fighting.

He, along with the rest of the members of the American Sports Team, have a running gag in the history of KOF which involves their invitations being stolen by other participants. Similarly, in the backstory of Neo Geo Battle Coliseum, Shermie defeats Lucky and takes his invitation to the tournament. Mizoguchi also takes his invitation by defeating him in KOF Maximum Impact Regulation "A".

Even when fighting, Lucky is always seen smiling around. He is very cheerful towards everyone and likes to fight very much. 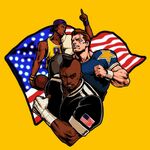