Assassination (She has thorough knowledge of all the body's pressure points.

Lien Neville (リアン・ネヴィル, Rian Neviru) is a character from SNK's fighting game series KOF: Maximum Impact, part of The King of Fighters series. She also makes an appearance in the OVA The King of Fighters: Another Day. Her nickname is The Sexy Avenger of the Shadows.

She conceptually began as the polar opposite to fellow KOF participant, Mai Shiranui. While Mai represents a "sexy and beautiful kunoichi", Lien represents another counterpart: the "sexy Western femme fatale". Her outfits are purposely designed to be "tight and constricting" to contrast Mai's clothing, which is made to allow for easy and quick movements. Her curled hair -also made to differ from Mai's long and straight hair- needed several retakes, along with a long trial-and-error process for the game's modelers. To further the contrast between the two assassins, efforts were made to make Lien more serious and darker than Mai, despite being one of the heroines in the series.

She is voiced by Fumiko Inoue and Claire Caponigro.

When she was ten years old, her parents were killed by Duke -due to her father trying to escape his terms with the Addes syndicate. Though Duke was under orders to kill everyone on site, Lien was spared and then raised by her parents' murderer to become an elite assassin under his employment. Since then, she swore to avenge her parents' deaths and made Duke her target of unrelenting hate -later with deeper feelings for him due to the time they spent together. Under Duke's orders, she fought Alba and Soiree's mentor, Fate, in a fair match that resulted with his death. When she hears that Jivatma had issued the order to kill her parents, she redirects her vengeance to Addes. She was last seen next to Duke during Maximum Impact 2's credits.

Lien is a cold woman who kills without remorse. This is the way Duke raised her and a part of her is thankful toward him, while another part intends on killing him.

She fights using an array of close combat techniques. She has a GPS in her clothing and a special bracelet. By saying Shien Ose (Requesting Backup) to the bracelet, a special satellite-weapon fires a beam of energy in front of her. According to Falcoon, she is the sequel's weakest character. 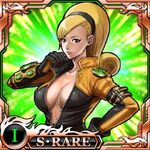 One of Lien's discarded designs.

The King of Fighters: Another Day: DVD Cover Image.

Lien in KOF: Another Day. 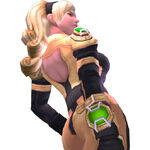 Retrieved from "https://snk.fandom.com/wiki/Lien_Neville?oldid=138070"
Community content is available under CC-BY-SA unless otherwise noted.