View source
watch 02:19
Wiki Targeted (Games)
Do you like this video?
Play Sound

Sidelong glances (he's overconfident about it)

Muleta (cape) and a Spanish sword

Self-taught matador assassination techniques
Laurence Blood (ローレンス・ブラッド Rōrensu Buraddo), alternatively spelled "Lawrence Blood" in official materials, is a character from the Fatal Fury series. A former Spanish matador who uses a self-styled martial art based on his deadly bullfighting methods. He serves as the right-hand man and servant of Wolfgang Krauser and participates in the tournament under his request.

A world-renowned bullfighter, easily capable of gracefully dodging the charges of bulls and killing them with one stroke of his sword. Few people suspect what is behind Laurence's incredible career. Since an early age, Laurence's family has had close ties with the Earl of Strolheim. Having served the Krauser family for generations, the Blood clan has always played the role of faithful followers. Laurence has not forgotten that vow, and has served the latest successor of the Strolheim heir in exchange that Krauser himself would support Laurence's training as a bull fighter. The trade fared off quite well, as Krauser had a respected and feared bodyguard in the form of Laurence, and Laurence himself had earned a name for himself in the bull fighting arenas.

Always the man who knows how to pay his debts, Laurence attends to Krauser's call, when the Emperor of Darkness decides to host the second King of Fighters tournament, in hopes of finding the man who had defeated Geese Howard in the first tourney. Laurence was in charge of protecting Strolheim Castle while Krauser was out trashing worthy opponents to prove his might. Laurence did not count on the power of the "Lone Wolf". Although Laurence was a formidable opponent, he was ultimately defeated and had to act witness to his lord's fall. After Krauser's defeat, Laurence vanishes from the bull fighting scene, possibly to serve his master Krauser for all eternity to make up for his incompetence.

Unlike Billy and Axel, Laurence is a brutish fighter who zealously took to his new duties for Krauser. Disregarding the feats of others, Laurence always tends to raise his own skills and abilities above others as he feels that his noble heritage has earned him a place among the greatest. Despite this, he takes pride in serving his master Krauser and to deter all those who dare stand against him. As a man of honor, he also knows when to pay his debts and to admit defeat. 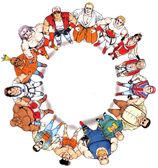