SNK Wiki
Register
Don't have an account?
Sign In
Advertisement
in: Characters, King of Fighters Characters, Male Characters,
and 12 more

Due to Kyo's design constantly changing, some of the developers desired the return of his old look. As a result, Kusanagi was added to the cast as a last minute decision.[1]

Kusanagi lives only to fight and wants to find a strong fighter for him to test his skills. He enjoys battling pyrokinetic hand to hand combatants (including a weapon user, Mai), especially battling the original Kyo.

Kusanagi fights using a modified version of Kyo's original fighting style from KOF '95. Oddly though, he has an altered version of Kyo's Mu Shiki known as instead the Saishuu Kessen Ougi: Zero Shiki (Final Play-Off Secret Skill: Zero Method). Unlike the other two Kyo clones, the style/method theme naming of the three clans is consistent in Kusanagi's attacks, and his shared moves with the original Kyo tend to be the exact same with minor alterations in damage. Kusanagi was also given some of Kyo's techniques from KOF '97 and onward that were never seen in the classic moveset, such as the 910 Shiki: Nue Tsumi (Method 910: Nue Plucker) and its counter-based moves.

His preferred method of fighting is more focused on offense as seen in The King of Fighters 2003, where he aggressively keeps the player at bay with a number of attacks and will often use his Yami Barai projectile, thus making the player rely heavily on defense such as blocking, evasions, and parry based techniques. While his aggressive A.I in KOF 2003 makes him a worthy challenge as a mid-boss, it should be noted that he can be defeated if defense is used to the player's advantage. Defeating Kusanagi with a DM can access the route to fighting the actual final bosses of KOF 2003, Chizuru & Maki then Mukai. If the player simply defeats him without using a DM the final boss will end up being Adelheid Bernstein who also fights aggressively like Kusanagi except slightly overpowered.

Kusanagi in The King of Fighters 2002 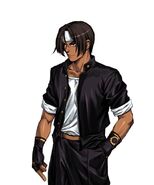 Kusanagi in The King of Fighters Neowave 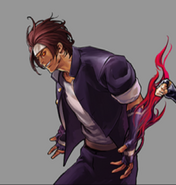 Kusanagi in The King of Fighters 2002: Unlimited Match 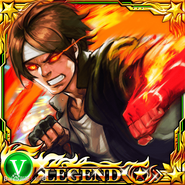 Kusanagi as a legend card in KOF X Fatal Fury

Kusanagi from the KOF 2002 Manga 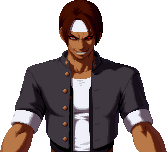