Kyo Kusanagi (has his DNA), K' (cloned from)

NESTS officer; Sponsor of The King of Fighters '99 tournament

Meetings with no signifigance, Earrings

He was designed to be a stylish and earnestly strong boss, though the supervising designer at the time admits, "I think I overdid it a little." A number of Krizalid's unused graphics were made available to the public in the Dreamcast release of the title.[1]

He is extremely powerful and he knows that, being very cocky and megalomaniacal at times, but he will serve NESTS loyally, no matter what. However, without his special suit his fighting abilities are still top-notch, and deep down he has a hard-working, earnest personality. He was incredibly loyal to Whip, with whom he shared a sibling-like bond.

Krizalid is an extremely powerful fighter sporting an inevitable anti-air move, high-gauge projectiles and dash attacks that are somewhat inescapable. He like K', also has the ability to use flames, and some people consider Krizalid as the second clone of Kyo Kusanagi. It is likely due to his battle suit providing him various forms of battle data fed into his body, his moves are all likely an amalgamation of others. Though it gives him an eerie sense of movement via his stiff animations.

His latest technique in 2002 UM, the Lightning Disaster, is a move where he is able to convert all his battle data into physical form.

Krizalid's first costume in The King of Fighters '99.

Krizalid in The King of Fighters '99. 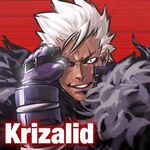