Japan (Reborn as Kouryu in Makai)

Martial arts master (as Gaisei), Warrior of Hell (as Kouryu)

Gaisei (慨世, Gaisei) (or rather, Kouryu (黄龍, Kōryū) in his new form) is a character from the Last Blade series. He was first introduced in The Last Blade but appeared as a boss character in The Last Blade 2. His official nickname is "Dragon Emperor: 和する帝王". Gaisei is symbolized by his muffler while Kouryu's symbolic items are the gems of the Four Gods that he wields.

He is voiced by Kōji Ishii.

Gaisei is the legendary warrior that trained Kaede, Yuki and Moriya Minakata. After Shinnosuke Kagami’s aborted plan to remove the seal on “Hell’s Gate” and bring about a new world order, Gaisei presumably stood up against the guardian in an attempt to stop him. Unfortunately, Shinnosuke is too powerful, and he dies in the battle. He is later discovered by his three students, who all vow to take revenge on his killer. Kaede accomplishes this, activating his power of the Seiryū and defeating Shinnosuke. This also clears Moriya’s reputation, as he was originally blamed for killing Gaisei.

In The Last Blade 2, Gaisei is still deceased. However, an unknown force of evil resurrects him and drives the now-undead warrior insane. Additionally, he manages to combine the legendary powers of Suzaku, Seiryū, Byakko and Genbu into his being, making him much more powerful than before. The now godlike warrior roams the lands and is called “Kouryu”, the Yellow Dragon.

While living, Gaisei was a honorable man and a loving father. He stood against Kagami but unfortunately died. As Kouryu, he remembers his life, but is drawn to madness by an unknown force. After being defeated, Gaisei recovers his memory and quickly seals himself in Makai, so he wouldn't lose his mind again.

Somehow, Kouryu received the powers of Seiryū, Suzaku, Byakko and Genbu. They are infused into gems attached to his sword.

Kouryu's fighting style consists mostly on one armed sword techniques with emphasis on low angle and high angle swings. He also uses his right arm, completely hidden in a long sleeve to grab his opponent or counter his opponent's attacks. Kouryu can conjure a bow that shoots energy and also has power over all of the Four Gods, making him a deadly foe. He can also alternate freely between Speed and Power modes in battle.

The mode switching is ironically not possible when he is in EX mode, and instead gives him a brief frame of invincibility.

Kouryu also has the longest SDM cinematic of all characters in the series.

Gaisei's death, as seen in Moriya's The Last Blade 2 ending.

Gaisei and a young Moriya, as seen in Moriya's The Last Blade 2 ending. 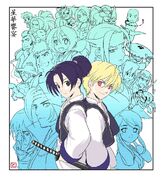 Retrieved from "https://snk.fandom.com/wiki/Kouryu?oldid=142857"
Community content is available under CC-BY-SA unless otherwise noted.