Kogoro Daimon (大門 虎五郎, Daimon Kogorō) is a character in the The King of Fighters series. He is voiced by Eiji Yano.

Kogoro is the son of Goro Daimon and an unnamed woman . Despite of his young age, his father is already teaching him in the way of Judo and he is learning very fast. Kogoro idolizes his father, often mimicking his moves and poses. 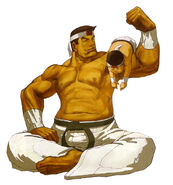 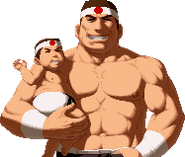 The King of Fighters 2002 winpose

Daimon and his son Kogoro, Falcoon Art
Add a photo to this gallery
Retrieved from "https://snk.fandom.com/wiki/Kogoro_Daimon?oldid=142726"
Community content is available under CC-BY-SA unless otherwise noted.