Computers (she's slowly getting used to them)

Running to get the mail

None; A school bag in Neo Geo Battle Coliseum

Personally modified martial arts
Kisarah Westfield (キサラ・ウェストフィールド, Kisara Wesutofīrudo) is a character from Aggressors of Dark Kombat. She is the only female character of the game.

She is voiced by Yasue Ishi and Kaori Minami.

Kisarah is a popular high school idol whose family came from England. She hounds Joe Kusanagi ever since he made a childhood promise to make her his girlfriend. She tries everything she can to make him notice her, eventually having to enter the tournament in Aggressors of Dark Kombat. In her ending, her wish is granted and they become a couple.

Neo Geo Battle Coliseum takes place three months after Aggressors of Dark Kombat; Kisarah didn't find Joe. She is abruptly teleported to the coliseum, which revitalizes her search. In her ending, she hears Joe and his gang declare a challenge to WAREZ over the coliseum's audio system and embraces him.

She is the class idol, admired by girls and boys alike for her whimsical charms. Although she has been living in Japan for awhile, she still isn't used to the local slang and often takes off-hand comments very literally.

Strength as the distance is long, when the hit is weak bend backward, strength rob forced down.

She fights at a close range with elbow attacks and high angled kicks and even slaps the opponent in the face; her attack range is made slightly longer in Neo Geo Battle Coliseum with her school bag, especially with new moves based on how she'll attack with it (giving her more unique ways of offense). Her flying kicks resemble the ones found in cheer leading routines.

Her quirky desperation move, "Jealousy Bomber", has her shoot a heart-shaped projectile to her opponent. If it hits, she'll kiss Joe (who magically appears behind her), making her opponents heartbroken and explode with envy. This move was originally made as a stab to Joe as she kissed another man in the original game (hence the name); it's supposed to make the enemy jealous in her newer appearances. 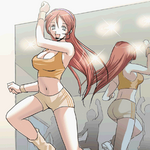 Kisarah as she appears in Days of Memories
Add a photo to this gallery
Retrieved from "https://snk.fandom.com/wiki/Kisarah_Westfield?oldid=151263"
Community content is available under CC-BY-SA unless otherwise noted.