King of the Monsters

King of the Monsters 2

King of the Monsters (キング・オブ・ザ・モンスターズ) is a fighting/wrestling game released by SNK in 1991 for arcades. It was later ported for the Super Nintendo and Sega Genesis by Takara. The game uses giant monsters that are reminiscent of kaijuand tokusatsu characters.

A sequel called King of the Monsters 2 was released a year later.

Players choose one of six monsters (four in the 16-bit ports) for battle, and two players can join forces to fight the monsters together. Battles end when one of the monsters is pinned for a three count or if time expires (in which case the player loses).

The game consists of 12 total levels (8 in the 16-bit ports) which takes place in 6 cities in a futuristic 1996 Japan. Each city is featured twice with the game beginning and ending in Tokyo. Other cities include Kyoto, Okayama, Osaka, Kobe and Hiroshima (the latter two are omitted from the SNES port. The Sega Genesis port only features Tokyo with the other cities being "Mega Port", "Dragon City", and "Castle City"). The player first must defeat all six monsters, with the last monster being oneself, but in a different palette. Then the player must defeat the six monsters again, in the same order, but this time in different cities.

In 1992, a sequel called King of the Monsters 2: The Next Thing  was released. In 2005, three characters from that sequel (Cyber-Woo, Super Geon and Atomic Guy) was featured in Neo Geo Battle Coliseum. These characters also appeared as character cards in the DS game SNK vs Capcom: Card Fighters DS.

In addition, to the original ports, King of the Monsters was included in SNK Arcade Classics Vol. 1 featuring many rare pieces of the game's production art production art. In 2018, the game was ported to the Nintendo Switch Shop by Hamster. The port features two extra features in a High Score Mode and Caravan Mode. A Neo Geo CD version was advertised and even previewed, but it never released. 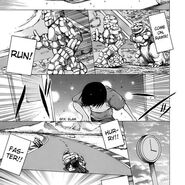 Rocky and Geon cameo in High Score Girl manga
Add a photo to this gallery
Retrieved from "https://snk.fandom.com/wiki/King_of_the_Monsters?oldid=149839"
Community content is available under CC-BY-SA unless otherwise noted.