Kikou Seiki Unitron (機甲世紀ユニトロン, Armored Century Unitron?) is a role-playing game developed by Yumekobo and released by SNK for the Neo Geo Pocket Color in January 2000 in Japan. It is the sequel to Biomotor Unitron.

It continues the gameplay of Biomotor Unitron with top down dungeons and menu-based combat. The story takes place 400 years in the future from the original. This time you control 10 characters. Like the original your main priorities are upgrading your Unitron robot. The game features more dungeons than the original and they are partly randomized on each play through. Using a link cable you can pit your Unitron against that of friends. 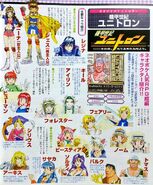 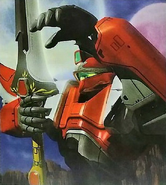 Key Art
Add a photo to this gallery
Retrieved from "https://snk.fandom.com/wiki/Kikou_Seiki_Unitron?oldid=142155"
Community content is available under CC-BY-SA unless otherwise noted.