SNK Wiki
Register
Don't have an account?
Sign In
Advertisement
in: Templates, Characters, Art of Fighting Characters,
and 13 more
English

An amulet from a special person

Croquet Napolitan from the meat shop on her way to school

Kasumi Todoh ( ) is a character in both the Art of Fighting and The King of Fighters series.

Kasumi is just like any teenage girl: she wants to enjoy her life. She loves her family very much and, when her father went missing, she wanted to restore his honor so her family would be together again. She had a relatively sheltered upbringing so she doesn't always know how to react to society's standards.

While she does have her rivalry with the Kyokugen practitioners with Ryo being for responsible for her father's disappearance, her wish to find her father seems to take higher priority in the KOF series.

User of Todohryu Aikijutsu, a form which employs Kendo, Kobudo and Aikido. Her moves relies on counter grabs, using her father's Kasaneate (Piling Hitter) and her high priority kicks. By the time of The King of Fighters 2000, she gained multi-input moves that allows her to chain different attacks.

Art of Fighting 3 by Shinkiro

The King of Fighters '96 artwork

The King of Fighters '99 by Shinkiro

The King of Fighters 2000 by Shinkiro

Kasumi in the first KOF pachislot 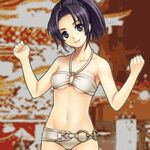