SNK Wiki
Register
Don't have an account?
Sign In
Advertisement
in: Characters, King of Fighters Characters, Days of Memories Characters,
and 3 more

She is voiced by Ayako Kawasumi.

Kaoru is a fan of Athena. Before the King of Fighters '97, she suffered from a certain disease and was hospitalized due to the immovability of her legs. Due to her circumstances, she became very depressed and distanced herself from society. Once she saw Athena's determination on the television, Kaoru was motivated to recover and continued her studies. She sent a letter to Athena, telling them her story and that she would be cheering for them in the 1997 tournament.

Athena was moved by her force of will and sent her tickets to the finals. The Psycho Soldiers made it to the finals, but lost to the Japan Team. At the end of the tournament, Athena, Kensou and Chin met Kaoru, who was excited to cheer for them in person. She then, proceeded to stand, showing that Athena's support helped her to recover. Kaoru became good friends with the Psycho Soldiers. She also watches over Bao and the Temple.

Kaoru was very shy and sorrowful before meeting Athena, but after that happened, Kaoru has found happiness in her friends.

Kaoru doesn't fight, but when used as a striker, she runs recklesly towards the enemy and pushes him/her.

Kaoru's first appearance in The King of Fighters '97.

Kaoru's cameo appearance in The King of Fighters XI 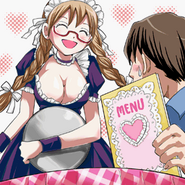 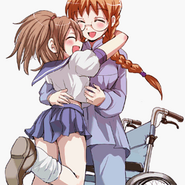