Crime boss and member of the Howard Connection

All the people that surround him (his people), a starry night sky

None (he can do anything, though)

He can tell others' emotions by looking at their eyes

Kain R. Heinlein (カイン・R・ハインライン, Kain Aru Hainrain) is a character in the Fatal Fury series. He is the final boss of Garou: Mark of the Wolves, but in order to reach him, the player must have at least an AAA-ranking win average throughout the game. Kain and Grant (Abel Cameron), while not brothers, were inspired by the Biblical Cain and Abel. He is voiced by Jun Hashimoto.

Kain is the brother of Marie Heinlein, Geese Howard's late wife and Rock Howard's mother. Unlike his sister, he faced a childhood of poverty whilst in the slums. Grant, known then as Abel Cameron, watched over him as his fatherly figure. Nineteen years before the game begins, Kain, after witnessing the violent death of a child in the streets, had enough of the slums and declared his ambitions for power. When he was eight years old, he entered a street fight and his strength was recognized by a wealthy kingpin named Don Papas. Adopted into the family thereafter, Kain eventually overthrew his benefactor and became the head honcho of the gang.

He heard the news that his sister, Marie, who died from her sadness of not being loved by her husband. Some time afterwards, Geese Howard was killed by Terry Bogard. He deemed the general populace jaded by mediocrity and peace. Thinking that a person truly experiences life when they're oppressed, Kain decided to take Geese's legacy and rule Second Southtown. He wanted to declare the city's independence from the US, make it a city-state, and then model the town into one that would constantly be exposed to violence which would make the inhabitants value their lives, with the strongest ruling over the weak.

Kain wanted Rock Howard to join them, so he created the "King of Fighters: Maximum Mayhem" tournament and invited several fighters, including Rock and Terry. His exact fate after the tournament remains unclear as several endings paint different results. In his own ending in the game, he tracks down the remaining crime bosses of Second Southtown and confronts them with Grant finally seizing control.

Kain is calm, careful, strong-willed and a serious man; he is also very ambitious, but not a megalomaniac. His antagonism stems from being a crime boss to impose his moral ideals, the value of life and living it, and not anything near greed, evil or control, as his brother-in-law Geese would. Both men are ruthless against adversary, shares a strict moral code and respects worthy opponents. He hates emotions as, according to him, they breed conniving and bias.

These characteristics make him more of an anti-villain than a true villain, having noble intent over his supposed evil deeds.

His fighting style, while not flamboyant or exceptional, is considered effective as he is methodical when using his techniques. He uses some acrobatic moves, and he relies very much on his powers. In terms of gameplay, he is a charger. All of his moves are written in the German language.

Mark Of The Wolves artwork by TONKO

Garou: Mark of the Wolves Promotional Art by TONKO
Add a photo to this gallery 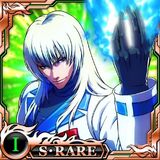 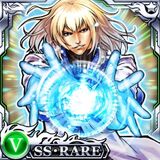 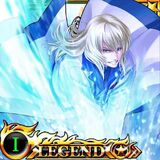 Retrieved from "https://snk.fandom.com/wiki/Kain_R._Heinlein?oldid=147205"
Community content is available under CC-BY-SA unless otherwise noted.