In the past, Jubei Yamada was such a fierce Judo warrior, that the prowess and skill that he released in his matches earned him the nickname of "The Demon". His young spirit and burning will was admired and respected by those who saw his fights. But that was long ago.

Now he is a giddy old man who passes his time eating cookies and taking care of his dojo, where he watches over the progress of his many students. Jubei has resorted to a more peaceful life. Having chosen to live away from the ways of fighting, Jubei rested in his dojo, with not too much effort spent. He spends his time with his old friend and rival Hanzo Shiranui, a Ninjutsu master and well trained in the ways of Koppo-ken. Hanzo had been training his granddaughter Mai in the Shiranui Ninjutsu style, but when he was approached by a young American boy called Andy Bogard who wanted to learn the Koppo-ken art, Hanzo left Mai to complete her training with Jubei. Jubei realized that Andy had a lot of potential to become a superb fighter, but he had more important tasks to do...

Even though his golden age has long been gone, Jubei refuses to sit back in a bed and wait for his death. Jubei likes to be where the action is, and always tries to live his remaining days as a youngster. Revived by the passion of other young fighters as Andy and Mai, Jubei takes a cue, and always takes to the fighting arena every now and then.

He is also seen to play into the "lecherous old man" stereotype, as he has a habit of peeping on naked young girls. In the second Fatal Fury OVA, he gropes Mai Shiranui without her consent.

A master of traditional Judo, Jubei also knows that many fighters around the world can fire projectiles, that's why he throws Japanese crackers at his enemy, since he can't fire projectiles himself.

Andy and Mai illustrated by Shinkiro 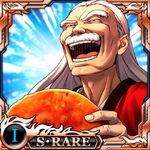 Eisuke Ogura's dream add for The King of Fighters series