watch 03:19
Wiki Targeted (Games)
Do you like this video?
Play Sound

All forms of combative sports

Joe Higashi (ジョー・ヒガシ, Jō Higashi or , Higashi Jō) is a character in both the Fatal Fury and The King of Fighters series, used mainly for comic relief. He tried to date Lilly Kane, a relationship which her brother greatly disapproves. His official nickname is The Young Champ of Muay Thai.

The development team wanted to make a fighter who filled the same role as Ki Ranger from Himitsu Sentai Gorenger. In contrast to Terry and Andy, the "hero" characters who have to shoulder the heavier and more serious plotlines, Joe is meant to be more of a "clown-ish" character and a "life of the party" type. He was modeled after the lead character of Abarehacchaku.

At first, Joe was a stoic man who lived for fighting and training. As time passed, he became a pretty goofy man who self-proclaims himself to be a genius with mostly everything. He doesn't take battles as seriously as the Bogards, but he loves to fight. If Joe could, he would fight every fighter he sees. He loves the spotlight and the glory of victory. 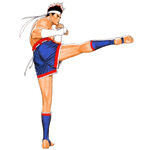 The King of Fighters '99 artwork.

The King of Fighters XII artwork.

The King of Fighters XIV render.
Add a photo to this gallery
Retrieved from "https://snk.fandom.com/wiki/Joe_Higashi?oldid=160212"
Community content is available under CC-BY-SA unless otherwise noted.