Maid to her "master"

.... (she seems to have an inferiority complex)

She is a very popular character in Japan, and stars in her own mobile game called Maid by Iroha. Another game based around her was scheduled for release on the Nintendo DS, but was canceled. She has also been added to a roster of usable characters in the Queen's Blade series, which is an extension of the fantasy game series, Lost Worlds. She also has several different figurines, hard cast and otherwise, made in her image.

Her conception began due to a desire to add an amorous character. At first, she was designed to be a mostly nude character though eventually her image changed with "a graceful crane" and "Asian wife" motif. Her namesake is taken from the Heian poem of the same name which is a pangram used for learning the hiragana syllabary.

The developers of Samurai Shodown (2019) are aware of Iroha's popularity. Since the game is being released worldwide the developers worried about her sexual expressions such as disrobing behind Shoji doors.[2] Nobuyuki Kuroki was against her inclusion to the base roster as it would clash with the game's atmosphere. He compared this to Yuri's debut in Art of Fighting 2 where tone became more "colourful." [2]

She is a crane who transforms herself into a Japanese maid. She serves her master and appears to think of him as the most important aspect of her life. Her master is unknown, but is likely to be the player him/herself as she often bows and speaks to the player before and after her fights. Creators have confirmed this in an interview, adding that she is specifically talking to the male players. This makes her, Wan-Fu and Yoshitora Tokugawa the only characters with interactions beyond the fourth wall. Her story is based of Japanese folklore story Tsuru no Ongaeshi (鶴の恩返し, lit. Crane's Return of a Favor).

Iroha is an obedient and cheerful maiden. She deeply cares for her master, trying her hardest to stay in her human form whilst in front of him.

She fights with two butterfly swords and relies on her speed for close ranged combat. She can also double jump. Several of her moves hint to her original form as a crane such as her projectile (a white feather) and her normal fighting stance. The most obvious reference is her POW move (in SS6) and Special Move (in SS [Reboot]), where she grabs her opponent and, behind Shoji doors, disrobes and physically beats her foe. Her silhouette during this sequence briefly changes into a crane. 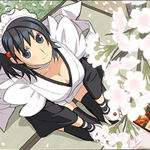 Retrieved from "https://snk.fandom.com/wiki/Iroha?oldid=154516"
Community content is available under CC-BY-SA unless otherwise noted.