Ikari Warriors, known in Japan as Ikari (, Ikari, lit. "Anger") is a 1986 run and gun arcade game by SNK (published in the United States and Europe by Tradewest). This was SNK's first major breakthrough US release and became something of a classic. The game was released at the time when there were many Commando clones on the market. What made Ikari Warriors instantly distinct, were rotary joysticks and the allowing simultaneous play by two people.

Ikari Warriors involves Ralf Jones and Clark Steel (known outside Japan as Paul and Vince in the Ikari series) battling through hordes of enemies. According to designer Keiko Iju, the game was inspired by the then-popular Rambo films and takes its name from the Japanese title of Rambo: First Blood Part II (Rambo: Ikari no Dasshutsu or "The Angry Escape").

The player (or players: see below) takes the role of a commando-like warrior, who must try to reach the village of Ikari. Enemy units attempting to kill the player include tanks, enemy soldiers and helicopters. A number of power-ups along the way help the player to achieve victory.

Ikari Warriors was the first to use rotary joysticks: those which could be rotated in addition to being pushed in eight directions. The game also featured two buttons, one for the standard gun and another for lobbing grenades. It allowed two players to play cooperatively, side by side - one of the few games to do so at the time - and to use vehicles (tank). The game cabinet was a standard upright.

The player begins as one of two commando-type warriors, garbed in red (Ralf) or blue (Clark) (depending on whether they are player one or two). They must proceed from the bottom of the screen upwards, towards the village of Ikari. Trying to prevent them from reaching the village are enemy soldiers and other units with a frightening arsenal of firepower. Along the way, players may commandeer enemy tanks to help fight their way through the enemy personnel. The tanks are immune to enemy bullets, but have a limited supply of fuel and will sustain damage when it runs out or the tank is caught in an explosion, taking the player with it unless he can exit the tank and get clear before it blows up.

Ikari Warriors was the first 'Commando' style game to give the player a limited amount of ammunition (99 bullets and 99 grenades, not actually a great handicap) as well as power-up and bonus icons to improve your firepower, dropped by red soldiers. These are listed as follows:

The game's joysticks could be rotated in clockwise and counter-clockwise directions. Turning the joystick changed the direction the character faced independent of the direction the character might be moving. This gave the player freedom to attack or walk in eight different directions. This made it generally easier—but sometimes harder—to take out enemy units. Aiming must also be taken into account by the warrior using the machine gun in his right hand, while throwing grenades with his left; no shot is fired from directly in front of the player. If a player takes too long moving up screen, the computer starts using "call for fire" on him. A red spots appears below him. This is tracking fire to speed up the game.

Because of its innovative controls, this game was initially very popular. However, the joysticks proved somewhat fragile, especially when played heavily as this game was. They need to be repaired often since being unable to turn makes the game almost unplayable. 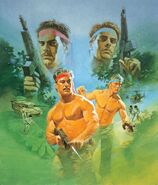