NESTS-style Boxing Arts
Igniz (イグニス, Igunisu) is the main antagonist and final boss of The King of Fighters 2001. His handsome and youthful appearance was specifically created at the sponsors' request. He becomes the new leader of the NESTS cartel after he kills his own father and former leader Nests.

Igniz hosts the KOF 2001 tournament in hopes of becoming a new god, deciding to test his new found power against the finalists. In the novel, Igniz labels K' as the strongest warrior and by defeating earths strongest warrior he would surpass all of humanity making him a God. His hopes were short-lived when he is defeated by K'. Cursing his failure and declaring himself a demon instead, Igniz attempts to destroy those who oppose him by plummeting NESTS' main headquarters out of orbit. However, the fortunate passengers in the falling station survive the heat inside it (apparently thanks to Ron). Igniz's death signals the end of the NESTS cartel and its saga.

After his death, his soul is somehow absorbed by Verse, and was released upon the latter's defeat along with many others. Igniz is suspected to have been brought back to life as a result.

Moreover it is revealed that NESTS as an organization is not completely eradicated, still exerting dangerous influences in the world, as per the accounts of the official KOF XIV manga.

Igniz is very serious and was for years very faithful to NESTS. When he started gaining more and more power, he started to think himself as a god and found NESTS was too small for him. He becomes a megalomaniac with hopes to rule the entire planet. In keeping with his belief that he is a god, his manner of speech is very preachy. His intro speech, and many of the things he says at the end of the match are brief (but lengthy compared to everyone else's quotes) speeches. In keeping with this, when assaulting opponents with his devastating Brutal God Project attack, he declares that he is casting them down from heaven. And when defeated, he deems himself to have fallen to the level of a demon.

Like many SNK bosses, Igniz is extremely powerful and difficult to defeat. Igniz relies on his powers and on his special suit. His suit is linked mentally to his mind and it contains two tentacles hidden in his wrists and four tentacles that end in pointed edges.

He had no crouching attack animations, yet had standing attacks that must be guarded low, and could not crouch initially like typical SNK bosses. His basic attacks has far and quick reach, and could poke enemies from a safe distance. Crouching animations and crouching attacks were added to him in KOF2002UM, and has characteristics reminiscent of Zero and his clone.

In his Disintegrational Universe attack, he draws power from the Milky Way and uses it against his opponent when he captures them in a crystal ball, which will display the overview of the Milky Way as well.

The King of Fighters 2001 winpose

The King of Fighters 2002 Unlimited Match 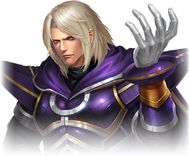 Add a photo to this gallery
Retrieved from "https://snk.fandom.com/wiki/Igniz?oldid=157061"
Community content is available under CC-BY-SA unless otherwise noted.