watch 02:34
Wiki Targeted (Games)
Do you like this video?
Play Sound

Photo of his tournament victories

Tomyankun with cobra inside of it

The producer for KoF XIII stated that he was added to be the "surprise character" for KoF fans, keeping true to their theme of not always adding popular characters for the newer cast's balance. He thought Hwa Jai would be one of the most interesting characters for an appearance in KoF, due to his detailed background history and previously lone playable appearance.

A former Muay Thai champion, he was defeated by Joe Higashi. Vowing to overcome the Tiger Kick with his own Dragon Kick, he was convinced his style should be more violent and brutal to defeat his rival. Killing thugs as he trained, he was eventually shunned by the martial arts world. Noticing Geese Howard's strength, he became his subordinate soon after.

During the King of Fighters tournament, he seeks to triumph over Joe for all the despair his rival caused him since his loss. However after Joe defeats him again, he realizes that he had lost due to his weak mind and spirit. Reformed, he leaves Geese's employment and becomes good friends with Joe and supports him as Muay Thai's unbeatable champion.

He is one of the many fighters beaten by Wolfgang Krauser in Fatal Fury 2. Joe avenges Hwa Jai in his ending.

The King of Fighters

Hwa Jai's past employment with Geese is elaborated to have started due to him winning a tournament in Japan. After cutting his ties with Geese, he went back to his homeland. Despite what earlier accounts have implied, Hwa Jai hasn't made a comeback to the Muay Thai ring since then. Both he and Raiden were called to Southtown by Kim Kaphwan, who believes that they are wasting their talents and need to be "reeducated". Though Hwa Jai replies that he has already abandoned his "evil ways", he is convinced by the masked wrestler that entering with the famous Kim might be a good way to revitalize his reputation to the public. Hwa Jai also wants to use this opportunity to take another shot at his rival, Joe. He and Raiden secretly proven to Chang Koehan and Choi Bounge that they are better on fooling Kim than Kim's first teammates.

Hwa Jai longs to be the best Muay Thai fighter there is. To accomplish that, he must defeat his sworn enemy Joe Higashi. After being defeated by Joe in 1992's KOF, he and Joe eventually became friends. Now, he realizes that life isn't about winning and he and Joe support each other all the time.

His KoF counterpart is rougher than his Fatal Fury counterpart, talking in a more brutal and intimidating manner. Even though he claims to have changed, he is rather cocky of his skills and is ready to start a fight at any time. His friendship with Joe has also been abandoned, thinking that he still needs to defeat his rival in a match. Considering that Raiden is "acting" like a villain in order to partake in the tournament, it can't be truly ruled out that Hwa Jai isn't just faking his cruelty in The King of Fighters for the sake of giving Kim something to work on.

While Hwa Jai does not have any kind of powers, when he ingests his "power drink", he gains above average strength, stamina and speed, but seems to lose some reflexes. Such drink is a mixture of medicinal herbs and, according to the KoF XIII development team, does not contain alcohol or cola.

Hwa Jai uses traditional Muay Thai. Hwa Jai is only able to perform his special moves after using his "power drink". He would automatically do this after taking a significant amount of damage (around 1/3). In the original Fatal Fury game, his only special move is the Dragon Kick. In the SNES version of Fatal Fury he gained another special move named "Dragon Back Breaker" and furthermore he could use that move without the effect of his power drink. KoF XIII includes a version of all of his Fatal Fury moves, the Dragon Kick, the Dragon Back Breaker and his drink power up, plus adds several other moves for Hwa Jai to use.

In Fatal Fury, Joe's and Hwa Jai's normal attacks are different, unlike KoF XIII. His Dragon kick is made to rival Joe's Tiger kick since it follows the Dragon vs Tiger theme.

In special ending of The King of Fighters XIII 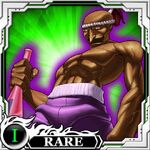 The King Of Fighters XIII: Intro

Add a photo to this gallery
Retrieved from "https://snk.fandom.com/wiki/Hwa_Jai?oldid=158104"
Community content is available under CC-BY-SA unless otherwise noted.