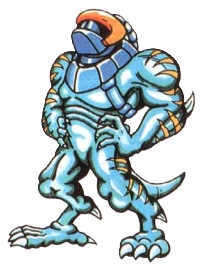 Huge Frogger is a hyper, humanoid toad who makes his first appearance in King of the Monsters 2. He is the first of Famardy's minions to face the heroes, as he is seen terrorizing what appears to be New York City. He is also the only boss who appears at the beginning of the stage and engages the player(s) in a short fight

Huge Frogger is extremely fast and agile, able to lunge at his opponents feet first. He can remove his space helmet to shoot a purple beam at other monsters. He taunts his opponents by standing with his hands on his waist and laughing.

When you need to go on an alien diet

Genesis version's select icon
Add a photo to this gallery
Retrieved from "https://snk.fandom.com/wiki/Huge_Frogger?oldid=136114"
Community content is available under CC-BY-SA unless otherwise noted.