She can make any animal out of snow

Internal Kung Fu (Taijiquan, Baguazhang, etc)
Hotaru Futaba (双葉 ほたる, Futaba Hotaru) is a character who was introduced in Garou: Mark of the Wolves, who also makes an appearance in Neo Geo Battle Coliseum and in the PS2 version of The King of Fighters XI. She was voted as the fourth favorite character at the time of debut with a total of 105 votes.[1]

She is voiced by Yuki Horie.

Hotaru is the daughter of a family of martial artists, but is not very fond of violence. She never wants to hurt others, which is the probable reason why her father taught her the lighter side of Chinese Kenpo; the Juu-kei style, which suits her easygoing personality. However, after her mother's death, both her father and her older brother were missing from her home. She enters the "King of Fighters: Maximum Mayhem" tournament based on rumors that her brother is there. In her ending, she finds Gato and claims that he's her older brother. She slaps him when he denies even knowing her. He then leaves her there, and Hotaru silently prays for her older brother to come back to her.

She participates in the Neo Geo Battle Coliseum tournament, since she heard that a man who looks like her brother may be there. She also appears in the Garou Team's ending for a similar reason, only to get humorously brushed aside by the celebrating Lillien Knights.

Hotaru is a calm and joyful girl, who was shaken by being abandoned by her family. She still has high hopes that her family will be united again.

Although it is highly implied that Gato is possibly her missing brother, nothing officially states that this claim is true. Itokatsu seems to warm up to him and Hotaru declares that he is based on woman's intuition. However, if this scenario is true, then Hotaru knows nothing about why Gato left their home or the real reason behind her mother's death.

Hotaru fights using internal Chinese martial arts, known for their soft motions. Many of her movements are graceful and she relies much more on ki-based attacks. She uses the styles of Taijiquan, Baguazhang and others, especially in later games where she games a variety of different stances.

Garou: Mark of the Wolves artwork.

The King of Fighters XI portrait. 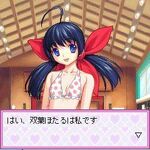 Birthday Celebration by Itokatsu
Add a photo to this gallery

Retrieved from "https://snk.fandom.com/wiki/Hotaru_Futaba?oldid=157270"
Community content is available under CC-BY-SA unless otherwise noted.