View source
watch 02:59
Metroid Dread - The Loop
Do you like this video?
Play Sound

Hot springs, his master and all the Shiranui-ryuu people

Going to the hot springs in the mountains with monkeys

He can climb the tallest tree in the mountains in 16.3 seconds (now attempting to break the record)

Japanese Kotone (Shiranui Oneechan plays it for him)

A wooden sword; shurikens and kunais

Koppou and Shiranui-ryuu Ninjutsu
Hokutomaru () is a character in the Fatal Fury series. He first appeared in Garou: Mark of the Wolves and he is the youngest character in that game.

He was voiced by Junko Takeuchi.

Hokutomaru is the only pupil of Andy Bogard who has lived most of his life in remote mountains. Andy retired from the fighting scene to teach Hokutomaru. When Hokutomaru was about to complete his training, Andy sent him to Second Southtown so he could enter the "King of Fighters: Maximum Mayhem" tournament. Hokutomaru didn't win the tournament, but he made his master proud, so Andy sent him a letter saying that he doesn't see Hokutomaru as a student, but as a rival.

The fifth Days of Memories establishes Hokutomaru as being biologically related to Mai, though a clear cut family relation for them isn't established. She is looking after him while juggling her makeshift identity and her nighttime banditry. Hokutomaru frequently runs away from her apartment, causing Mai to worry for him.

If the player wishes to have the route focusing on Mai's day job, they have to select the text options that ignore her nighttime SHIRANUI alias. Doing so will follow a story path that has the protagonist look for the missing Hokutomaru to support Mai. As he tails Hokutomaru, he eventually discovers that Mr. Big is bullying and extorting Mai; Hokutomaru is trying to figure out ways to protect her on his own. Though the boy is initially cold towards the photographer, Hokutomaru warms up to the protagonist once he realizes that the protagonist genuinely cares for him and Mai. Hokutomaru then starts calling him "Big brother" as a show of respect.

The good ending for this path ends with Mai and the protagonist getting married; they happily continue to look after Hokutomaru together. The bad ending has Mai and Hokutomaru move away, leaving behind a single letter thanking the protagonist.

Hokutomaru is a boy who grew up in nature; his best friends are the mountain monkeys near his training grounds. He knows nothing of the civilized world, being excited and confused by life in a big city. He is a brash kid who doesn't like to be treated as a child. He's very noisy and often acts before thinking, but he has a strong will. Though he is obedient to his master and admires Andy, Hokutomaru clashes with his "big sister" Mai.

His fighting style is considered by some an amalgam of Andy and Mai's fighting styles. He uses Andy's Kuhadan and Mai Shiranui's weapon throwing. He is quick and unpredictable, having some of the fastest attacks in the game.

Garou: Mark Of The Wolves Artwork

Garou: Mark of the Wolves: Opening.

Mark of the Wolves promo art 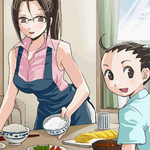 Hokutomaru and Mai in Days Of Memories

Garou: Mark of the Wolves: Promotional artwork for Playstation 4 by Ogura

Hokutomaru and Andy, by Falcoon
Español
Community content is available under CC-BY-SA unless otherwise noted.
Advertisement