Japan (she is also part Russian)

A teddy bear she received as a young girl

Sumo stew made by her private cook, tea, petit-fours

Hinako Shijou ( , Shijō Hinako) is an original character who was first introduced as a member of the Woman Fighters Team in The King of Fighters 2000.

She is voiced by Ayako Kawasumi.

She was originally modeled after manga title character, Jarinko Chie, who is a brash young woman that fights with sumo moves. After designer's protests, her character was radically changed to instead be a naive but warm-hearted high school girl in nobility. She was intended to fight barefoot, but the idea was scrapped. The tape remaining on her fingers is a tiny remnant of her original concept.[1]

She is also a character who became less popular than expected, perhaps due to the lack of female sumo wrestlers at the time.[2]

Hinako attends in an all-girl school and grew to value sumo's techniques after watching a professional match. Hoping to practice along with her classmates, she tries to create a female sumo club at her school but the idea fails to gain support. Once she hears about the Women Team auditioning for a member, Hinako enters and succeeds in proving her worth by defeating Yuri Sakazaki in a mock match. She continues to appear for their team until The King of Fighters 2003 where she was asked to team with Athena Asamiya and Malin to form the "High School Girl" Team.

Hinako is a kind girl who wishes to prove that girls can also practice sumo. She is somewhat shy, but also a very loyal friend. Although her blond hair and facial features indicate her Russian descent, nonetheless she considers herself to be purely Japanese.

Hinako fights with sumo wrestling. Her fighting style surrounds around takedowns, throws, slaps and even headbutts. All of her moves are named after real sumo moves.

Rejected artwork of Hinako and her dog for The King of Fighters 2001. 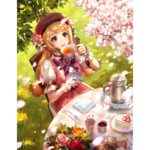 Retrieved from "https://snk.fandom.com/wiki/Hinako_Shijou?oldid=156399"
Community content is available under CC-BY-SA unless otherwise noted.