Goeniko (ゲニ子?) is an umbrella term used to identify a popular fan-made character for several characters, first designed, seen and made playable for the fighting game engine MUGEN. A reference to her as an independent character can be seen in the first pachi-slot game for The King of Fighters. Her first mod was made by Ahuron though several different versions of her have been made since then. She is also known by many other names such as Goenika, Amanda, Wind, Kazeko, Reas, Sheryl Wainwright, or simply Goenitz.

Goeniko made his playable appearance in The King of Fighters '98 Ultimate Match Online.

She is visually based on the Midnight Bliss'd version of Goenitz in SNK vs Capcom: SVC Chaos. Since her creation, Goeniko became a somewhat popular internet meme and is known to fans outside the MUGEN fandom.

Over time, fans grew divided on Goeniko's real gender. Some argued that "she" was merely Goenitz while others wanted her to be her own character. These split opinions eventually lead to the creations of Wind (Goenitz's daughter who gets possessed by Orochi) and Reas (a transformation).

Goeniko was originally devised to be a clone of Goenitz that was created by Rugal. He wanted to use her to once again gain his hands on Orochi's power. However, she rebelled against her creator and stayed true to her origin's roots. She is a popular character for MUGEN drama stories, one of which includes MUGEN Stories Infinity.

She usually emulates Goenitz's personality. On some occasions, she acts more submissive and doesn't like to fight as much as her other counterparts, and at times, downplays the hatred of humans normally Goenitz has. One version of her also has a close partnership with Goenitz and Yuri.

Due to being largely based from Goenitz, it is generally assumed she also carries the same set of Orochi powers and capabilities as the original, but these are mostly untouched, downplayed or ignored in various interpretations of Goeniko.

Goeniko fights mainly with her control over wind. She has very little concern for a martial style. Some versions of her can also perform Rugal's Genocide Cutter. 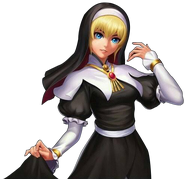 Retrieved from "https://snk.fandom.com/wiki/Goeniko?oldid=141400"
Community content is available under CC-BY-SA unless otherwise noted.