Whatever buildings, ships, and other large objects he picks up

Geon (ジオン) is a character from SNK's fighting/wrestling game series King of the Monsters. He is a likely homage to the famous kaiju hero Godzilla.

Geon was a remnant of the Cretaceous Dinosaur period who slept deep within the Earth's crust. Once the weather became erratic and bizarre, he awoke and rose from the depths of Russian soil.

Geon is a cruel monster with an endless appetite.

Geon is a monster that uses all of his natural weapons, such as his claws, spikes, fangs and tail. He is considered to be one of the easiest monsters to play in the game. 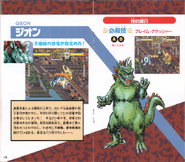 JPN SNES Manual
Add a photo to this gallery
Retrieved from "https://snk.fandom.com/wiki/Geon?oldid=148286"
Community content is available under CC-BY-SA unless otherwise noted.