Turtles (he has too many to count); Chibita, Fukusuke, Daigoro (turtles that help him during fights)

His beard, taking part in conversations

Hihon (火梵, “Fire Purity”), a fishing rod, and his creel (which holds turtles)

For this character, he is only known by his titular name and does not possess a given name and a family name.

Genbu no Okina (玄武の翁, translated as “Old Man of the Black Tortoise”) is a character in the Last Blade series. He was first introduced in The Last Blade and is a member of the Four Gods, namely Genbu, the Black Tortoise. His official slogan is "Fighting Hermit: 闘う隠者 (A hermit in conflict)" He is voiced by Shigehumi Nakai.

Genbu no Okina is a guardian of the demonic portal known as “Hell’s Gate”. For years, he and the other three guardians stood watch over its seal. For many years it was peaceful and Okina resigned himself to fishing and the complacent life of a hermit. Five years into his life of leisure, he was found by Kaede, who wished to train with him to improve his own sword skills. Okina taught the young man all he knew and Kaede left after he had improved his skills. Sensing the boy’s departure and inquiry for training as a sign of trouble, Okina followed him at a distance.

Despite Kaede preventing the opening of the Gate, it had still not been sealed properly. As the oldest guardian, Okina was aware of that and knew that to properly seal the portal, the legendary “Sealing Maiden” was required to perform the ritual. He also discovered that an assassin called the “Messenger From Afar” was rumored to pursue the maiden. Determined to fulfill his role as a guardian, Okina set out on a journey.

An experienced fighter that loved solitude. He loves his land and lives to protect it from the dangers of Makai. Okina believes that Kagami and Shigen are not evil. This is further proven in Okina's ending in the first game, where he scolds Kagami for his actions, and later praise Kagami in his improvement, in Kagami's own ending in the second game.

He also believes deeply that Kaede will become a perfect guardian. Okina was also a friend of Gaisei, and most likely took over Kaede, Yuki and Moriya's training after Gaisei's death.

Okina is a master of the sword, but he does not use one. He uses a fishing rod in battle and the aid of his turtles as well. His small stature gives him sneaky options to wreak havoc to opponents, and can unleash a SDM without the chime warning for a surprise attack.

Okina can also heal himself using his own turtle.

Okina is more potent in Power, but is more effective in EX, which increases his mindgames factor, for which he has enough moves such as a teleport motion, a command grab, turtle attacks and several expansion moves. This may take time to get the hang of, though. 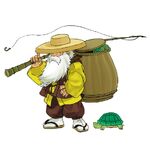 Okina in The Last Blade

The Last Blade: Cover of the Neo Geo CD version by Shinkiro.

Retrieved from "https://snk.fandom.com/wiki/Genbu_no_Okina?oldid=148761"
Community content is available under CC-BY-SA unless otherwise noted.