People who stop his ambitions

Undetermined (He starts things and then gets tired of them)

None (he's good at billiards, though)

Aiki-Jujutsu and chi techniques from the Hakkyokuseiken school

Geese Howard (ギース・ハワード) is the chief antagonist of the Fatal Fury series and a secondary villain in the Art of Fighting series. His role varies in the The King of Fighters storyline, but he is always either in the position of a villain or an anti-hero.

Geese also appears in many CD dramas and stars in his own character image album. He also sings in a number of image songs. In addition to appearing in manga adaptations of the Fatal Fury, Art of Fighting and The King of Fighters games published in Japan, Geese Howard was also the subject of a single-volume manga published in 1996 titled The Geese Howard Story by Etsuya Amajishi, adapting the character's fictional history from the Art of Fighting and Fatal Fury games. It was followed by a single-volume sequel in 1997 titled Geese in the Dark, by the same author.

Geese is a proud man who considers himself a mighty warrior and as such thinks highly of himself. He craves power in all of its forms: from money to immortality, a desire influenced by various tragedies in his childhood, from losing his mother to being estranged as a stepson. He can be quite vengeful as well, as he holds grudges against Krauser and Jeff, whom he later killed. Despite appearing to be heartless however, he has his own code of honor and there are lines that even he will not cross; never underestimating his opponents, especially after suffering defeat from Terry. He will crush anyone who stands in his way and reward those he deems worthy of his respect, or in the case of Billy, whoever he sympathizes with.

He appears to show respect to Tung Fu Rue despite their histories, even if he is sometimes sarcastic about it, as seen in Neo Geo Battle Coliseum, and more recently in The King of Fighters XIV.

He has a fascination with Japan, often adorning the Japanese decorum on the Geese Tower rooftop with American flags, and has assimilated some Nipponese culture as a result.

Whether because of ambition or to simply keep them from possible harm, he was apparently distant from his personal family, ignoring Rock's pleas to help Marie in her sickness until she reportedly passed away. As a result, this earned him Rock's indignation and the latter's devotion to stay away from his shadow.

Geese uses Aikijutsu as his primary fighting style. Aikijutsu is a style with several throws, counter throws and locks. However, it is a style that normally lacks striking attacks, and Geese's strikes seem to come from various disciplines of Japanese martial arts, mainly karate; though he also knows traditional and older schools of Japanese martial arts. While Geese is from the US, his extensive practice of such martial arts has lead nearly all of his techniques to be written and spoken out in Japanese. Via his codifying 2/3-way counter throws, some games may or may not allow Geese to even reverse physical supers/DM's.

Many official sources state that his fighting style is Hakkyokuseiken, but this is disputed. It can be assumed that Hakkyokuseiken only teaches the way of the chi and not fighting techniques, as Terry Bogard, Tung Fu Rue and Geese Howard, students of this school, employ different fighting styles. Through his chi control, many of Geese's attacks possess a wind-based motif, mainly through techniques such as the Reppuuken (Gale Fist), Shippuuken (Hurricane Fist) and Raging Storm; as he develops his style, he also adds some electricity-based touches, such as his popular Raimei Gouha Nage (Thunderclap Great Crush Throw), and the stronger version of his Raging Storm, the Thunder Break. KOF '96 was also the game that debuted the alternate "wind slashing" variation of his Reppuuken, which also converts his Shippuuken to turn into a short range energy shot instead that negates projectiles.

His Double Reppuuken was also unique in that via Geese tossing out an energy mass prior to form a bigger projectile afterward, it would vary between games if the said energy mass would dissipate or not upon contact with either the opponent or another projectile (if so, it would cause Geese to toss a normal Reppuuken instead of the bigger one). Another one of his inconsistencies his is one of his many unique throw attacks, the Shinkuu Nage (Vacuum Throw); a unique technique he Geese tosses his opponent overhead then waves his arms while ending in a focused stance. In some games, it is a normal throw, while in others, it is a command throw instead; either way, its command has often varied, and ironically Rock has found more use for his version of it due to his ability to break it.

His younger self however, has used an old technique named the Explosion Ball, and also favored a more rigid boxing style mixed with karate. However, as he ages to his more popular present self, he employs many new attacks and has a more upright stance that allows him to focus on his reversals and various throws. Though in tribute to his younger self, one technique present-Geese has retained in some titles from Art of Fighting 2 is his Hishou Nichirin Zan (Flying Day Ring Slash). He also has the Rashoumon (Thin Life Gate) technique, which debuted in Real Bout Fatal Fury 2.

His Deadly Rave technique was created via Geese taking interest of the Kyokugen style's Ryuuko Ranbu technique, in games barring Art of Fighting 2, The King of Fighters '98 Ultimate Match and The King of Fighters Neowave where the DM was an automatic super, the DM was also famous for having a special sequenced command that could lead into finisher (a series of weaker-to-stronger normal attack inputs followed by a quarter-circle-back finishing input), but also required consistent timing and rhythm (which could be purposely dropped at the very end to extend combos).

While Geese has been balanced in terms of gameplay in many titles barring ones where he is intentionally overpowered, his younger version in Neowave was viable even in competitive play, despite some attributes being hard to counter such as his Deadly Rave having a notable amount of invincibility with a great hitbox; Geese even in his debut was rather considered to be a notably powerful boss in SNK titles, as his counter throws even worked when no incoming attacks triggered it. Younger Geese in Neowave also lacked a properly-programmed HSDM/MAX2DM. Ironically via Real Bout 2, Geese was notably toned down, with almost half of his classic moveset being removed along with a few new moves added. This version of him combined with his "Nightmare" version was brought back in a more balanced composite version in '98 Ultimate Match. His SvC Chaos incarnation which was reused for the later ports of KOF 2002 also had touches from his Nightmare self as well, despite being his normal self that is still alive.

In KOF XIV, Geese instead is slightly reworked with some of his attacks removed once more, along with having new moves up his arsenal; his Ja'ei Ken (Wicked Shadow Fist) being removed and gaining a command throw mainly exclusive to Nightmare Geese. In prior games, Geese was lacking in offensive mixup; this is remedied with his new Fudou Ken (Motionless Fist), a move where Geese rushes forward with a palm strike (and was originally a command normal with auto-guard in the Maximum Impact series) with three followups, A (Flatter), Ba (Name) and Un (Growl), which respectively hit mid, low and overhead (but do not act as a true combo outside of counter hit/juggle hit for the latter two). Other new techniques in XIV are the DM's Raigou Reppuuken (Thunderpeal Gale Fist), a lightning-laced variant of his signature projectile, and the Oni Hanmon (Ogre Agony), a brand new DM counter throw that will still waste a stock if not triggered properly; if triggered, Geese will thrust his palm into the opponent then smash their face in to the ground. 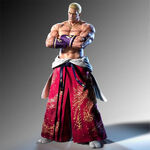