Untitled Fatal Fury Installment
Certainly, they existed... Those blinded by ambition.. Those consumed with vengeance. But here, they do not exist. Only winners and losers here. For here, THE MIGHTY RULE!

Yes, they do exist... Those who sacrifice all for their ambitions. Those who endanger all for the taste of revenge. Whose actions are just? Justice is not the issue. The victorious will survive. The vanquished shall fall. This is the only justice. For ten years later... THE MIGHTY RULE!

Legends don't die... They get better!

Garou: Mark of the Wolves ( ) or Fatal Fury: Mark of the Wolves for the Dreamcast release; referred to as Garou or MOTW for short, is the eighth and currently latest game in the Fatal Fury series. It is known for pushing the graphical capabilities of the Neo Geo past its limit, utilizing pre-rendered 3D graphics rasterized as sprites to give the illusion of 3D depth and semi-transparency, as well as its well-balanced roster of characters and highly technical gameplay.

In 2006, as part of SNK's celebration of the series' 15 year anniversary, a retrospective movie was made to take place shortly after. It recaps the events of the canonical Fatal Fury games: Fatal Fury, Fatal Fury 2, Fatal Fury 3, and Real Bout Fatal Fury; it is particularly notable for appearances or mentions of characters previously missing from the MOTW era, as Geese Howard, Duck King, Richard Meyer and Blue Mary. The main illustrations were done by Eisuke Ogura, and some illustrations were made by Tonko.

In December 2016, the game was released for three platforms: for PS4 and PS Vita, on day 3, and for Steam, on day 9. There was already another PC version, released by the Humble Bundle, in January of that year, and another released by GOG, in October 5, 2017. In May 11, 2017, as part of ACA Neo Geo, the game is released for Nintendo Switch.

The main illustrations are made by TONKO.

Set ten years after the death of the notorious crime lord Geese Howard, the city of South Town has become more peaceful. Now, the stage is in the neighboring city of Second South Town. A new fighting tournament called "King of Fighters: Maximum Mayhem" starts in the area, and several characters related with the fighters from the old era of King of Fighters tournaments participate within it.

Multiple changes to Garou were made to show a bigger difference from previous games due to most characters being new. The character of Rock Howard was created by Nobuyuki Kuroki in 1998. Both he and Yasuyuki Oda wondered what type of hero would succeed Terry Bogard in Fatal Fury's latest game, Garou: Mark of the Wolves. While they were not confident with Rock, they still decided to make him as the new protagonist. Rock was designed to contrast previous 'masculine' Fatal Fury characters by giving him a more bishonen appearance, something Nobuyuki Kuroki felt the sequel needed to balance the cast and an issue he felt Real Bout suffered. Similarly, Hotaru was given a moe inspired look to balance the playable characters. Terry was also redesigned, labeled as "cool" by the SNK staff was because they thought Terry's previous look had become outdated. Kengo Asai, who previously worked in Voltage Fighter Gowcaizer, Money Puzzle Exchanger and The Last Blade, is also involved in development of the game.

SNK director Nobuyuki Kuroki stated in February 2020 that he is personally interested in 'reviving' Garou, whose supposed sequel suffered from development hell and cancellation, presumably due to SNK's financial predicament at that time (and its bankrupcty two years later). A sequel was confirmed to be in development on August 7 at EVO 2022.

for strong/heavy punch and

for strong/heavy kick). However, chaining normal attacks into each other tends to be strict on timing, and may involve heavy usage of the recurring feint mechanic (

) in order to cancel them smoothly. Stage gimmicks and plane-changing, as seen in previous titles, were removed.

The Tactical Offensive Position System or T.O.P., is a new system. Before each match begins, the player is given option to adjust the T.O.P. meter's influence onto three different places on their character's life meter (beginning, middle, end). When a character's life meter reaches the white T.O.P. section, the character will flash with their HP bar's T.O.P. section turning orange, and enter a special state which will grant them the following advantages:

The Just Defense allows players to benefit from defending by activating it against incoming attacks at the last second within 7 frames. Players can perform Just Defense against any type of attack, even being able to Just Defend in midair despite the lack of air blocking. Just Defense has following advantages:

It is comparable to the Street Fighter III series' Parrying, except the latter is more offense-oriented (done with a forward direction instead of back), has no pushblock, grants an attack reset and gives no life regeneration. Additionally, a mechanic similar to Just Defense was introduced in Street Fighter Alpha/Zero 3 that instead reduces guard meter consumption, made visually prominent by a brief white flashing of the character if successfully done.

This game is noticeable for adding an almost entirely new cast of characters, with only one returning character. Due to being the main protagonist of the Fatal Fury series, Terry Bogard is the only veteran character present in the game. The new characters added to the roster are:

Note: Both bosses are playable in all modes of the game.

Note 1: The intros appears only in Story Mode. The Sub-Boss stage don't have an intro.

Note 2: Marky, the little boy who appears along with Kevin in Story Mode, isn't present in Versus and Practice Modes. 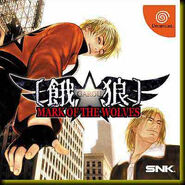 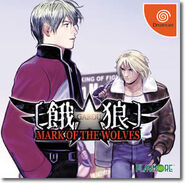 XBLA "餓狼 MARK OF THE WOLVES"（Garou Mark of the Wolves）

GAROU MARK OF THE WOLVES Trailer

The game's sequel, tentatively titled Garou: Mark of the Wolves 2, was reported to be in the works on the Neo Geo system several times by Korean news sources. Since 2002, the project has been put on hold and eventually cancelled. According to Falcoon at the 2005 KOF Party, the game's sequel was around 70% percent complete by the old SNK staff. Ureshino reported that a new grappler character and Joe Higashi's apprentice were added to the roster, called Kuan Konta. Recently, new details about the sequel were revealed.

In Japan, Game Machine listed Garou: Mark of the Wolves on their January 1, 2000 issue as being the most-successful arcade game of the month. GameSpot named Mark of the Wolves the best fighting game of 2001. It was nominated for the publication's annual "Best Game No One Played" and "Best Dreamcast Game" prizes among console games, but lost these respectively to Victorious Boxers: Ippo's Road to Glory and Phantasy Star Online.