His drill necklace, the edge of needles and blades

The middle of a big crowd

As long as his head can fit, he can slip through anything

Flowers with a lot of pollen

Freeman (フリーマン) is a character from the Fatal Fury series. He made his debut in Garou: Mark of the Wolves.

He is voiced by Eiji Yano.

Freeman is a British serial killer who kills for his pleasure. Nothing is known about his past. He travels to Second Southtown when he learns of the King of Fighters: Maximum Mayhem tournament, hoping to kill strong opponents. One of his victims was Kevin Rian's partner, a former member of the SWAT forces. After the tournament, Freeman was being hunted down by Second Southtown's Police Department. Freeman was shot by a sniper and fell into a river. The police then looked for his body, but it was nowhere to be found, implying he somehow survived this incident.

Freeman is a madman who has a very sadistic and sinister personality. He kills simply for pleasure, nothing else is known about his life, not even a full name.

Resilience - is able to intake a lot of punishment and enjoys it too.

Freeman uses his cutting abilities as his fighting style. He has several contortion skills.

His preference of heavy metal music is well represented, as several of his movenames reference it: Nightmare, Phobia, Gorefest (these two names are also given to two of Vice's moves in The King of Fighters series), Overkill (which may both refer to the thrash metal band and to the album and song by Motörhead), Crow, V.O.D. (Voice Of Destruction), and Morbid Angel are all bands. He also has Creeping Death, which is a song by Metallica, and Full Blast, a term commonly associated with music volume. Phobia is the name of a song by German Thrash Metal band, Kreator. Gorefest is the name of a Death Metal band.

Garou: Mark of the Wolves: Opening. 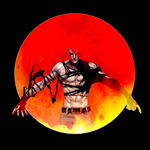 Garou: Mark of the Wolves - Valentine's Day by TONKO

Artwork by Falcoon
Add a photo to this gallery
Retrieved from "https://snk.fandom.com/wiki/Freeman?oldid=142793"
Community content is available under CC-BY-SA unless otherwise noted.