His son, Junior and his wife

Parents who are hard on their children

Drinking a beer in one swig

Kickboxing
Franco Bash (フランコ・バッシュ) is a character introduced in Fatal Fury 3: Road to the Final Victory. He is voiced by B.J. Love.

Franco is a former super heavy kickboxing champion who was undefeated during his fighting career. He presumably retired to raise a family and became an airplane mechanic at South Town Airport to continue supporting them. In order to motivate the champ to fight in the tournament, Yamazaki kidnapped Franco's son, Junior. Franco reluctantly serves as his right-hand man until his son is returned to him after Yamazaki's defeat. He participates in the following tournament due to his family's encouragements to make a formal comeback for his fighting career.

Franco was introduced as a tragic 'hero' who was searching for his son and would not stop at any cost. After finding his son, he becomes comic relief used by SNK and his personality becomes somewhat goofy and very noisy.

Franco is a Kickboxer who uses a very unorthodox martial style. He is surprisingly fast for his size, and excels in high-low mixup games and chain combos. 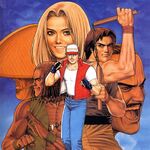 Franco and his trainer, Pat Daniel, in Fatal Fury 3.