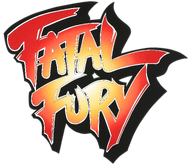 Fatal Fury, known in Japan as Garou Densetsu (, lit. "Legend of the Hungry Wolf") is a fighting game series developed by SNK for the Neo Geo system.

The main fighting game feature that the original Fatal Fury was known for was the two-plane system. Characters would fight from two different planes, and by stepping between the planes, attacks could be dodged with ease. Later games dropped the two-plane system, replacing it with a complex system of dodging including everything from simple half second dodges into the background to a three plane system. Characters often had moves that could attack across the two planes, attack both planes at once, or otherwise attack characters attempting to dodge.

Later Fatal Fury games experimented with various other gimmicks. "Ring-outs", where a character loses the round if the character is thrown into the edges of the fighting backdrop; single- air plane backdrops, where the element of dodging ball is eliminated altogether causing moves that sent opponents to the opposite air plane to do collateral damage. The most successful of these gimmicks were the Deadly Rave and Just Defend. The Deadly Rave was a super combo used by several characters, where after execution, a player had to press a preset series of buttons with exact timing for the entire combo to execute. The Just Defend was a type of protected block in which players regain lost life, did not wear down the player's guard crush meter and removed all block stuns making combo interruptions smoother.

The Fatal Fury series chronicles the rise of the "Hungry Wolf" Terry Bogard (hence the Japanese title, which translates to Legend of the Hungry Wolf), and the simultaneous fall of the criminal empire of Geese Howard. Like many other SNK titles of the time, the first installment takes place in a fictitious American city called South Town. Brimming with violence and corruption, South Town forms the ideal backdrop for the annual King of Fighters fighting tournament, organized by the notorious crimelord Geese Howard. No fighter has ever managed to beat his right-hand man and appointed champion, Billy Kane, until Terry arrives on the scene.

The second installment of the series features Geese's half-brother, Wolfgang Krauser, who internationalizes the formerly South Town-only tournament in a bid to take on the world's strongest combatants. The King of Fighters tournament is no longer a part of the storyline by the third game, having been spun off into its own series. Instead, the third installment centers around Terry Bogard's attempts to stop Geese from obtaining an ancient scroll that would give him the powers of a lost and dangerous martial art form.

Finally, Garou: Mark of the Wolves takes place a generation later. It focuses on Rock Howard: Terry's protégé and the son of Geese, who makes a shocking discovery about his own past when he enters the King of Fighters: Maximum Mayhem tournament that's being held by a ruthless crimelord named Kain R. Heinlein, who holds an unexpected connection with Rock.

Connections to Art of Fighting series

Connections to The King of Fighters series

The first game of the Fatal Fury series allowed players to select one of three characters, Terry Bogard, Andy Bogard, and Joe Higashi, as they battled a gauntlet of computer-controlled opponents ending with Billy Kane and Geese Howard. When two players were playing, players had the option of either playing cooperatively against a computer opponent or competitively against each other. This game was later ported to Genesis and SNES by Takara. On 10-07, 2007, this game was ported onto the Wii's Virtual Console service as one of the first three Neo Geo Games in the US.

This game had the characters fight each other in locales around the world. There were eight selectable characters and four computer-controlled bosses. This game was later ported to the Genesis and SNES by Takara, and to PC Engine CD by Hudson Soft. Fatal Fury 2 was one of the first fighting games to include super moves, in this game's case when the player had low vitality, they could execute a Desperation Attack.

An update of Fatal Fury 2 that adds three characters from the original Fatal Fury (Duck King, Tung Fu Rue, and Geese Howard), as well as Ryo Sakazaki from Art of Fighting into the mix, in addition to making the bosses into playable characters. This game was one of the most popular games in Japan in 1993. It has been said that, as a result of the popularity that ensued from Ryo being a hidden character in this game, The King of Fighters as a series was born. This game was later ported to the Game Gear and SNES by Takara, to the Sega CD by Victor Interactive Studios/JVC Digital Studios, and to PC Engine CD by Hudson Soft. SNK Playmore released an Xbox 360 port on September 5, 2007 on Xbox Live Arcade.

With the King of Fighters tournament spun off into its own series, this game focuses on the main characters as they try to stop the mysterious Ryuji Yamazaki and the Jin Twins: Jin Chonshu and Jin Chonrei. Basically Fatal Fury 3 is the story of the 3 Hidensho (secret scrolls) just prior to Geese obtaining all 3 of them. Various new characters are introduced, including fan-favorite Blue Mary.

Continuing the story of Fatal Fury 3, the cast of the previous game returns along with three returning characters (Kim Kaphwan, Duck King and Billy Kane), as they try to stop Geese Howard from claiming the mysterious Jin scrolls for himself, culminating with the canonical death of Geese. Basically this game is the story of the final battle between Terry and Geese (who now possesses all 3 secret scrolls). Ported to Japanese Sega Saturn and PlayStation by SNK and PAL PlayStation by SCEE.

Like Fatal Fury Special before it, Real Bout Special reintroduced many of the characters from previous games, most notably Wolfgang Krauser. Ported to the Sega Saturn by SNK in Japan.

A port of Real Bout Special which adds Alfred (the hidden boss in Real Bout 2) as a playable character, and includes an all new boss character named White, based upon Alexander de Large, a character from the 1971 Stanley Kubrick movie A Clockwork Orange. The story of this game is the story of White's brainwashing of Billy Kane and attempted takeover of South Town's underworld in the power vacuum left by the death of Geese in Real Bout Fatal Fury 1. An interested thing to note is that Geese Howard sports a halo over his head in this game, a reference to his passing in the original Real Bout. Dominated Mind also featured new moves, hidden unlockable super moves, super cancelling (known in the game as "Final Impacts"), and removed the line-sway system from the game.

Real Bout 2 is not part of the official storyline, but introduced two new characters, Li Xiangfei and Rick Strowd, the former of which would later appear in The King of Fighters series. The game also featured a new hidden boss named Alfred. In "ALL ABOUT SNK Taisen Kakutou Game 1991-2000" (), the game is specifically stated to have no relevant story in the Fatal Fury universe, and the events depicted therein are not canon. Interestingly enough some super moves can be performed easily in this game such as Duck's grab super.

An adaptation of Real Bout Fatal Fury 2: The Newcomers. Featured exclusive character Lao, playable only in vs. mode.

A 3D fighting game that retells the story of Fatal Fury, but with many of its established characters. The story of this game does not replace Fatal Fury 1 because they both represent the same story and series of events. It's just that not all the events/characters of FF are depicted in FFWA, and vice versa. This game was later released in the US on the Sony PlayStation.

The game was known for its graphical brilliance, being able to push the capabilities of the Neo-Geo to its limits, as well as for its highly technical gameplay. Some had considered Mark of the Wolves to be the "last great SNK game" as the production quality of SNK's later games began to take a nosedive as the company's financial woes increased. This game was later released in the US and in Japan on the Sega Dreamcast. A Playstation 2 version has also been released in Japan.

Compilation containing the original Fatal Fury, Fatal Fury 2, Fatal Fury Special and Fatal Fury 3. Contains a language option for each game between Japanese and English. The game was released in the United States as of August 2007.

As with most fighting game series, the Fatal Fury series has an extensive cast of character that has increased with each installment. The three main heroes from the original game (Terry Bogard, Andy Bogard, and Joe Higashi) have remained constant in each installment, along with the beautiful kunoichi (female ninja) Mai Shiranui. Also, some characters have made appearances outside the series, particularly in The King of Fighters series and in Art of Fighting 2 (where a young Geese Howard appears as a hidden opponent). Likewise, characters from outside the series have appeared in the Fatal Fury games. Ryo Sakazaki from the Art of Fighting series makes an appearance in a hidden "dream match" in Fatal Fury Special, while his older self from Buriki One appears in Fatal Fury: Wild Ambition. Garou: Mark of the Wolves is the only Fatal Fury game not to feature any returning character with the exception of Terry Bogard himself, who was completely redesigned for the game.

The Fatal Fury series inspired a trilogy of animated movies produced by NAS with SNK, featuring character designs by Masami Obari. The first is a television special which aired in 1992 on Fuji TV titled Fatal Fury: Legend of the Hungry Wolf (Battle Fighters Garou Densetsu), which adapts the plot of the first game. It was followed by a second TV special in 1993 titled Fatal Fury 2: The New Battle (Battle Fighters Garou Densetsu 2) based on the second game, which also aired on Fuji TV. The two TV specials were followed by a theatrically released film in 1994 titled Fatal Fury: The Motion Picture (Garou Densetsu: The Motion Picture), which features an original plot and new characters. The first two TV specials were released on a single laserdisc and later on DVD.

VIZ Communications picked up the license for the trilogy and produced English dubbed versions of each movie, releasing them straight to VHS, and later on DVD. The movies were later released subtitled, with the first two Fatal Fury movies released in one video titled Fatal Fury One-Two Punch. The subbed version of Fatal Fury 2 features a scene involving a rematch between Joe and Big Bear (Raiden) that was cut from the dubbed version. The English DVD release of the TV specials, Fatal Fury: Double Impact, features this same scene as a DVD extra.

While it is not exactly an animated feature, SNK Playmore also created a movie clip for the series's 15th Anniversary entitled Garou Densetsu ~ Memories of Stray Wolves. It was first shown at the 2006 Tokyo Game Show and can be seen in the anniversary boxset on DVD format.

Introduced in the First Film

Introduced in the Second Film

Introduced in the Third Film

Another handheld game called Fatal Fury Mobile was released on January 9, 2007 for Mobile (Java/J2ME). It was developed by Living Mobile Ltd. It featured 8 playable characters: Andy Bogard, Terry Bogard, Kim Kaphwan, Joe Higashi, Big Bear, Mai Shiranui, Cheng Shizan and Jubei Yamada. The game included various modes such as Quick Play, Single Match, Tournament, Training and Survival. The game also includes a Saved section where you can save progress from Survival and Tournament modes by giving you an option to do so after every match(Right Soft Key). Only 4 save slots were available. Local Highscores were available too.