Live or die! Expert fighters are waiting to fight you!

Fatal Fury: King of Fighters, released in Japan as Garou Densetsu: Shukumei no Tatakai ( のい, "Legend of the Hungry Wolf: The Battle of Destiny") is a 1991 head-to-head fighting game released by SNK for the Neo Geo arcade and home platforms.

This game was SNK's first fighting game for the Neo Geo system (released a few months after the arcade release of the original Street Fighter II) and served as the inaugural game in their Fatal Fury series, as well as the first game to depict the fictional "King of Fighters" tournament (which became the basis for the later The King of Fighters games). Many of SNK's mainstay characters, including the Bogard brothers Terry and Andy, and their arch-nemesis Geese Howard, made their debut in this game.

The plot of Fatal Fury centers around a martial arts tournament known as the "King of Fighters" tournament, held in the fictional American city of South Town and sponsored by local crime boss Geese Howard. Ten years prior to the events of the game, Geese murdered a rival martial artist named Jeff Bogard who was on his trail. Now, Jeff's adopted sons, Terry Bogard and Andy Bogard, along with their friend Joe Higashi, enter the tournament to get their revenge on Geese.

The gameplay follows the typical formula of most fighting games: the player competes against his opponent in best two-out-of-three matches. The play controls consist of an eight directional lever and three attack buttons: punch, kick and throw. As in the original Street Fighter, each of the playable character has special techniques that are performed by inputting specific commands and combinations with the joystick and buttons. The input methods for special moves are shown to the player during the course of the game (after every bonus round), as opposed to being given in an instruction card in the game's cabinet. The most novel aspect of Fatal Fury was the inclusion of a two-lane fighting system. The player can jump from one lane to another to avoid projectile attack or knock their opponent to the other plane.

When a second player joins during the middle of a fight, instead of postponing the current battle for a match between the two players, the game will make both players team-up against the current CPU opponent in a two-on-one match before their battle takes place. After every second match in the single player tournament, the player will participate in a bonus round mini-game involving an arm wrestling match against a machine. The player must tap the A button rapidly to win these mini-games.

In Japan, Game Machine listed Fatal Fury: King of Fighters on their January 1, 1992 issue as being the third most-successful table arcade unit of the month. It went on to be Japan's fourth highest-grossing arcade game of 1992, below Street Fighter II (two versions) and Captain Commando. In North America, RePlay reported Fatal Fury to be the second most-popular arcade game in February 1992.

The game received positive reviews upon release. Paul Rand of Computer and Video Games called it one of the best Neo Geo games available in 1992 and compared it favorably with Street Fighter II, stating Fatal Fury was a "brilliant feast of fighting" with "huge and excellently drawn" character sprites, "lots of great" animation, and unique special attacks "giving the game more variety."

In a retrospective review, Maximum commented in 1996 that the game failed to offer any real competition for Street Fighter II in either playability or character selection. They concluded: "The only main point in this game's favour is that two of the characters may team together to take on a computer opponent in a three-player frenzy, and the game also tries to offer something else new with a two-tier playing arena, but the slow action and the disgracefully difficult fireball motions make special moves something of a rare occurrence". 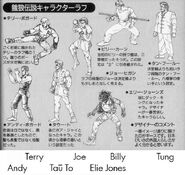