Robotic fighting
Brocken (ブロッケン) is a character in the World Heroes series.

Brocken is a robot developed by Dr. Brown initially for the Nazi army. After their final defeat in World War II, he travels the world to prove that the power of science is the greatest of them all.

Brocken has a cold heart, having no emotions for the most part; a recurring error in his systems can cause feelings to surface on rare occasions. He is also quite proud of his cyborg body and abilities, as well as the technology of his country.

Brocken fights with his built-in weapons and his physical strength.

While not directly inspired by any historical figure, Brocken was inspired by Brocken Jr., a character in the pro wrestling Superhero comedy anime and manga series Kinnikuman who was named after a peak in Germany called The Brocken, as well as Rudolf von Stroheim from Part 2 of the series Jojo's Bizarre Adventure, as they are both cyborg German soldiers that praise German science.

His multiple built-in weapons and extendable limbs is faintly reminiscent of Inspector Gadget. Similarities to a T-800 model Terminator also exist in Brocken too. 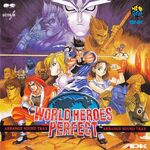