Member of Those from the Past

An unknown technique to use her weapon

She is a member of the group known as Those from the Past. She appeared in 2003, alongside Mukai at the end of the tournament. She was controlling Chizuru Kagura and made her create a copy of her sister, Maki Kagura. She and Mukai broke the Orochi seal through Chizuru and they are hoping to give the Orochi power to their unknown master.

In The King of Fighters XI, she controlled Rose Bernstein and ordered her to create the tournament, so Magaki could put his plans in motion. She apparently carries orders from her masters to Ash Crimson, but he doesn't take her too seriously.

In The King of Fighters XIII, she serves Saiki faithfully, but makes the mistake of standing too closely to Ash when Saiki possesses him, and is blown away by the resulting energy surge. In the ending to the Story Mode she is seen walking in a crowd, confirming she survived.

She looks very young, but she is very sadistic. It's unknown at this point if she agrees with Mukai's point of view or if she shares Magaki's ideas, aside from the fact that she is loyal to Saiki.

KOF XIII Special Artwork Saiki & Those From The Past 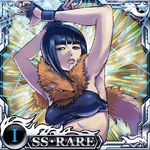 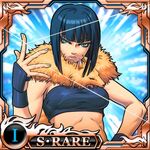 The King of Fighters XIII: Promotional Art
Add a photo to this gallery
Retrieved from "https://snk.fandom.com/wiki/Botan?oldid=142699"
Community content is available under CC-BY-SA unless otherwise noted.