Capoeira
Bob Wilson (ボブ・ウィルソン, Roberto Wilson in the Portuguese adaptation) is a character introduced in Fatal Fury 3: Road to the Final Victory. A cheerful man who loves to combine dancing with his Brazilian style of Capoeira. He is voiced by Toshiyuki Morikawa.

Bob chose Capoeira as he believes it is the strongest martial art in the world. Dreaming to accomplish great things, it became his entire life and it helped him to escape poverty. He was scouted by Richard in Brazil after he noticed Bob's passion for Capoeira and recruited him as a secondary manager to help him run the Pao Pao Cafe 2.

During Terry's sidestory for The King of Fighters XII, he is running the cafe. Although Terry owes the cafe money, Bob lets him eat for free due to his reputation as the best fighter in South Town.

In The King of Fighters XIV, Bob eventually got involved with Richard on unable to control most KOF veteran heroines into out of control drunken party girls who end up causing bar fights since his master's first suffer of being a running gag in the end of The King of Fighters XIII. Despite Bob's attempt to call Terry, Andy and Ryo Sakazaki to calm most heroines down, the bar fights end up getting worst.

Bob Wilson is portrayed as a one-dimensional and happy-go-lucky fighter. He is a very cheerful person and is usally seen smiling, giving a thumbs up gesture after winning a match. Even when fighting, Bob shows a tremendous amount of spirit. During intermissions he'll often have something light-hearted to say that is fairily obvious for all to see. Wilson by definition is the epitome of the term irie, a strongly positive feeling. It's this optimistic and respectful personality which helps to bring returning customers to Pao Pao Cafe 2.

Bob learned Capoeira from his "Mestre" (master), Richard. His capoeira fighting style is the actual full-contact version and not the performance version (thus his fighting stance not featuring any ginga, which he only performs as a win pose). 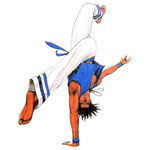