B-Games, hardware for home use

Bao (Chinese: 包 Bāo; Japanese: パオ Pao) was an active member of the Psycho Soldier Team through The King of Fighters '99 and The King of Fighters 2001. He was created by developers to fill in the missing gap for the team caused by the newer gaming mechanics introduced in The King of Fighters '99. To serve as a contrast to Jhun Hoon, who was being developed at the same time, Bao was conceptualized to be a "beginner friendly" character with a simple yet effective moveset.

According to the Psycho Soldier Team Story of The King Of Fighters XI, Bao was an abandoned orphan left by his parents in the care of a mountain temple in China. He was born on a cursed day that occurs only once every 200 years. Asked by the head priest to adopt him, Chin Gentsai agrees as Bao exhibits psycho power. Before it could get out of control, Chin decided it necessary that Bao should train with him in order to control such power, introducing the boy to Sie Kensou, his other adoptive student, and Athena Asamiya. As Bao trains with them, Kensou gradually loses his powers until they become obsolete. It is unknown how it happens, but Bao and Kensou continue to lose and gain their powers as the years progress as both of them share the same source of energy: the Dragon Spirit. Ron and Misty seem to take an interest in it, revealing a probable importance of the Dragon Spirit in future KOF storylines. Unfortunately Bao decided not to participate in any further tournaments for awhile, as he tends to do alot of training in order for him to control such power.

Bao tries to live his life as a normal child of his age, he likes to play video games and go fishing. He also seess Athena and Kensou as his older siblings as the trio appears to be very close. But unlike Kensou, Bao learns not to always rely on his powers.

Bao mainly fights with his powers, but he also knows the discipline of Kung Fu just like his teammates, some of his moves may be based on Tai Chi. Ironically, despite his "beginner friendly-concept, Bao's moveset gameplay-wise is known for its many differing commands. 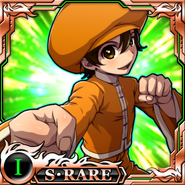 The King of Fighters Online

Bao in The King of Fighters '99

Bao in The King of Fighters '99

Bao in The King of Fighters 2000
Add a photo to this gallery
Retrieved from "https://snk.fandom.com/wiki/Bao?oldid=148570"
Community content is available under CC-BY-SA unless otherwise noted.