This article is about the protagonist of her self-titled game. For the Psycho Soldier and The King of Fighters character, see Athena Asamiya.

Princess Athena (アテナ), also known as simply Athena (アテナ), is a character and main protagonist in the arcade game Athena, which was later ported to several platforms. Athena became very popular upon her debut, as the sole bikini-wearing heroine in the market at the time.

According to an interview with Gamest, the developers state that the planner from Alpha Mission wanted to create a brand new heroine to separate his new project from the 'mass-produced' shooting games he had done. Her bikini getup was chosen in appreciation of the female form and also to help her put on different outfits.

Athena is the rebellious princess of the Kingdom of Victory, which exists in a heavenly world. She is bored with the uneventful day-to-day life in the castle and yearns for exciting adventures. One day, she is tempted to open the Door Which Shoudn't Be Opened in the basement of Castle Victory, and falls down to another realm called Fantasy World. The ensuing adventure is told in the game Athena.

After her return, Athena is again bored with the peaceful days without adventures. This time, she opens the Door Which Shoudn't Be Opened: B, disregarding the advice from her close friend Helene the palace maid, and they both fall to Elysium World to begin the adventure of Athena: Full Throttle.

After an undetermined period of time, Athena reappears in present day as an opponent in SNK vs. Capcom: SVC Chaos, in the secret area of Holy World. Thanks to the fighting prowess she demonstrated during her escapades, she has been given the post of defender of the heavenly gates. Her main task is to beat every intruder in combat. Her counterpart in the game is the Capcom character Red Arremer, who is the secret opponent guarding the entrance to the Hell World.

She is still the guardian of Heaven in Neo Geo Battle Coliseum, but has been banished for an undisclosed reason and must redeem herself by solving problems on Earth. In her ending, Athena is prepared to return to Heaven, when a voice tells her that defending the world from WAREZ only earned her 15 of the 100 points necessary to return to her previous job, much to Athena's dismay.

Perhaps due to her godly nature, Athena does not age much through the centuries and retains the maturity of a teenager: enthusiastic, self-centered, and moody. She shares some personality traits with Athena Asamiya, yet she appears to be more naive than the latter. Athena also prefers to wear little clothing to battle, like she did during her first adventure.

Athena's weapons of choice for one-on-one fighting are a sword and a heart-shaped buckler, but she may use clubs, bows or magic wands while on her adventures, or fight unarmed if need be. 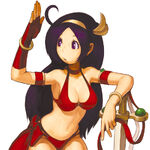