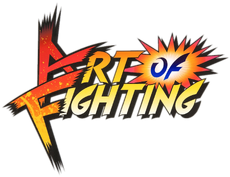 Art of Fighting (の, lit. "Fist of the Dragon and Tiger") is a trilogy of competitive fighting game titles that were released for the Neo Geo platform in the early 1990s. It was the second fighting game franchise created by SNK, following the Fatal Fury series and is set in the same fictional universe.

The games follow the struggles of the students of the Kyokugenryu Karate Dojo, Ryo Sakazaki and Robert Garcia, in what appears to be the late seventies. Ryo is the son of the Kyokugen Karate discipline’s creator, Takuma Sakazaki, and Robert is the wayward son of a billionaire family from Italy. The initial two titles are set in Southtown, a common location in SNK games that is also the setting for the Fatal Fury series, while the third appears to take place in a fictitious area of Mexico.

The Art of Fighting series originally served as a prequel to the Fatal Fury series, taking place during the late 1970s and early 1980s. This is reflected by the characters' official birthdates in the series and given ages in each game. The Hyper Neo Geo 64 game Buriki One and the PlayStation port of Fatal Fury: Wild Ambition feature an older modern-day Ryo adopting his father's former identity of Mr. Karate.

The Art of Fighting series follows the conventions of the time in the sense that the player faces a variety of opponents in best two-out-of-three matches. Each of the game's characters have a unique fighting style and set of special techniques. The player has two basic attacks—punch and kick—as well as a utility button that switches between punches, kicks, and throws. A fourth button is used for taunting. Art of Fighting's contribution to the genre was the inclusion of a "spirit gauge" underneath the character's life bar. When characters perform special techniques, their spirit gauge is depleted and their special attacks become weaker. Players can also drain their opponent's spirit gauge by taunting them.

The Art of Fighting series was also one of the first fighting series to allow players to perform a "super attack". In the original Art of Fighting, the player's character learns a super attack (dubbed the super death blow) by completing one of the game's bonus rounds. This technique is available by default in the third game. All three games also feature "Desperation Attacks" that can only be performed when the player's health is low and the life bar is flashing red. This feature was completely hidden in the first game and available only to Ryo and Robert on the Neo Geo, but is available to all characters on the Super Nintendo release.

The series also introduced graphical scaling into the genre: as the characters move away from each other, the camera will zoom out to keep both players on the screen. In previous fighting titles, the left and right sides of the screen acted as invisible boundaries; characters could only move as far from one another as the width of the screen permitted. Scaling allowed for a broader range of movement; the only boundaries in Art of Fighting are the edges of the stage. Character textures in Art of Fighting will change as the fight progresses to become more bruised and cut.

In the first game, Ryo Sakazaki and Robert Garcia set out to find Ryo's sister, Yuri, who has been kidnapped by Mr. Big on behalf of Geese Howard. She was taken in order to incense Takuma Sakazaki, and Ryo who refused to work for Big. After they defeat Mr. Big, Ryo and Robert face the enigmatic Mr. Karate. Art of Fighting's story ends with a cliff-hanger as Yuri is about to disclose the true identity of Mr. Karate as their father Takuma. Art of Fighting's events are referenced often in the wider SNK universe. King of Fighters '97 for instance, parodies the events of the game in its ending. Only Ryo and Robert are playable in the 1-player story mode. Although eight of the characters are playable in the 2-player vs. modes. Mr. Big and Mr. Karate can be played via the use of cheat codes.

Art of Fighting 2 was released in 1994. The game's story is set a year after the original. Geese Howard, a rising star in Southtown's criminal underworld, calls fighters to the city for a new tournament, "The King of Fighters". Art of Fighting 2 is the onlygame that Yuri Sakazaki is a playable character in the series. It also marked the only time that she donned her trademark outfit, which was made famous in the King of Fighters series. This second installment of the series added the "rage gauge". Similar to the "spirit system" of its predecessor, it limited the use and effectiveness of special attacks. This game is also notorious for its difficulty, with it being referred in many fighting circles as having some of the toughest opponent A.I. in a fighting game.

The mostly forgotten Art of Fighting 3 (Art of Fighting: Ryūko no Ken Gaiden in Japan) featured a new cast of characters with the exception of Ryo and Robert. One of the game's characters, Kasumi Todoh, became a part of the King of Fighters cast. The story switched focus from the Sakazakis to Robert Garcia. Garcia disappears to search for an old childhood friend, Freia Lawrence, and he tracks her to Glasshill, Mexico. Freia is sought out by the game's antagonist, Wyler, to complete a powerful elixir that was created by his and Freia's fathers. The drug affects users in a similar manner as the potion in The Strange Case of Dr. Jekyll and Mr. Hyde.

Art of Fighting Anthology is a collection which includes all three games in the series. It been released as part of Neo Geo Online Collection, only for PlayStation versions. (PS2 & PS4).

Art of Fighting 3: The Path of the Warrior